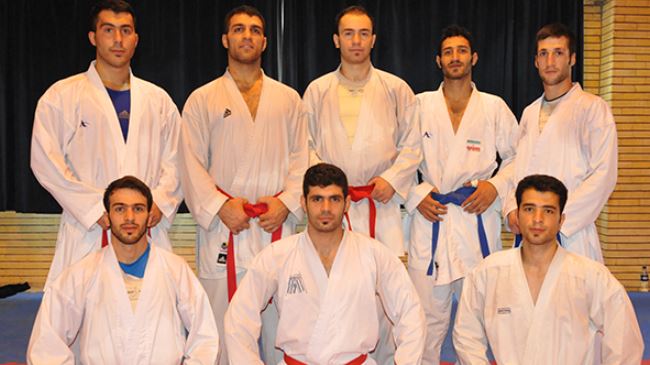 On Sunday, Iranian team, comprised of Saeed Ahmadi, Sajjad Ganjzadeh, Ebrahim Hassanbeigi, Ali Fadakar, Amir Mehdizadeh and Zabihollah Poursheib, overcame the Maccedonian side in the final round of men’s kumite contests to clinch the gold medal.

The Iranian men’s kumite squad had earlier defeated Taiwan, Brazil and Azerbaijan in its march to the final.

The development came two day after Hamideh Abbasali of Iran snatched a bronze medal in the women’s +68-kilogram kumite contests after trouncing her Chinese opponent.

Iranian athlete Ganjzadeh also brought home a bronze in men’s +84-kilogram kumite competitions on Thursday, while Rosita Alipour grabbed a silver medal in women’s minus 61-kilogram kumite contests on Friday after failing in her attempts to beat an athlete from Slovakia.

Moreover, Poursheib was awarded a bronze in the men’s minus 84-kilogram kumite competitions on Friday.

On Saturday, Mehizadeh collected Iran’s first gold medal in men’s minus 60-kilogram kumite competitions after he defeated his Egyptian opponent in the final contest.

The 9th edition of FISU World University Karate Championship opened in the coastal town of Bar in southern Montenegro on June 18, and wrapped up on June 22.