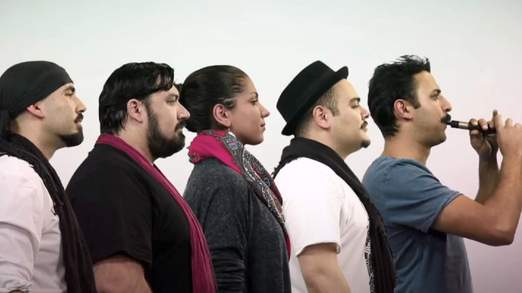 Provincial police chief Col. Rahmatollah Taheri was quoted as saying the video clip, produced by the London-based Ajam Band, features scenes from outside and inside Iran, including the city of Shahroud, where two 23-year-olds appearing in the film and a 26-year-old photographer were arrested.

The video shows young people, including women not wearing the mandatory headscarf, singing and dancing in support of Iran’s national team, interspersed with footage from matches. They are shown waving Iranian flags and dancing in cars, streets, homes and public parks.

Taheri called the video “vulgar” and urged the youth not to take part in such activities. The official said those arrested have been referred for possible prosecution.

In May police arrested six young Iranian men and women for dancing to Pharrell Williams’ song “Happy” in an online video, but released them days later.

Iranian hard-liners view such behavior as promoting the spread of Western “decadence” and undermining the Islamic Republic, which bars women from dancing in public or appearing outside without covering their hair with a hijab. The government also bans some websites.

Iranian President Hassan Rouhani, a relative moderate, has pursued a policy of social and cultural openness alongside greater engagement with the West on the country’s disputed nuclear program. His hard-line rivals have pushed back, accusing him of showing too much leniency to those who would challenge conservative Islamic norms.