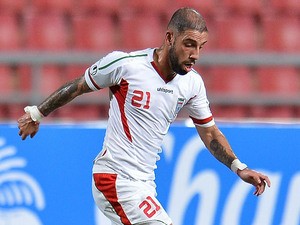 Iran midfielder Ashkah Dejagah has vowed that his team will be going all out to find the net in their final World Cup group game against Bosnia-Herzegovina on Wednesday.

Despite failing to score in their opening two fixtures of the tournament, the Iranians will have a slim chance of reaching the second round if they win tomorrow evening.

While earning plenty of plaudits for their hardy defensive performances so far, Dejagah is eager for the side to make more of an impact at the other end of the pitch.

“Hopefully this third match will bring another step up,” he told FIFA.com. “We’ll definitely be going for goals and we still have a chance to go through, I’m sure of that.

“What we need to do is take the good things we’ve done so far, improve a little bit in other areas and give everything to beat Bosnia. If we do that – and I think it’s a game we can win – we can still qualify.”

Dejagah has scored four goals in 16 appearances for Iran since he made his debut in 2012.