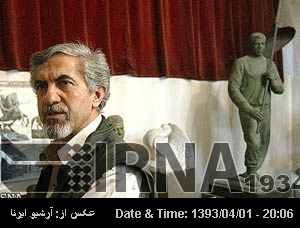 Tehran, June 22, IRNA — A sculpture city will be set up soon in Tehran to educate and organize programs for art students attracted to the field.

According to the Iranian artist and sculptor Hossein Fakhimi, the city to be named ˈArt Cityˈ will accommodate art students from elementary school to postgraduate levels.

“Art City is where thought, imagination as well as artistic and social needs will be created and produced,” Monday edition of the English-language newspaper Iran Daily quoted Fakhimi as saying.

Fakhimi said he presented the plan for the city prior to the victory of the 1979 Islamic Revolution; however, the executive works were delayed due to his own will.

“I think that now is the time for constructing the city to help educate the youth,” he said.

Fakhimi noted that arts and industry are interrelated. “When Iranians lost touch with arts, they became dependent on the West. Despite the fact that many of the western designs are rooted in oriental arts.

“For instance, wax casting is one of the ancient methods in sculpture that I learned in Spain. However, excavations in Shahr-e Sukhteh (the Burnt City) in the southeastern province of Sistan and Baluchistan proved that this method was current in Iran in the past centuries.”

The artist said that by constructing the city, a generation of Iranian artists will learn sculpture from scientific and practical aspects.

“We can hope that everything from urban furniture to our costumes will be inspired by genuine Iranian designs,” he said.

Fakhimi holds a PhD from Madrid Fine Arts Faculty. He is among the founders of the Iranian Organization of Scientific and Industrial Research.