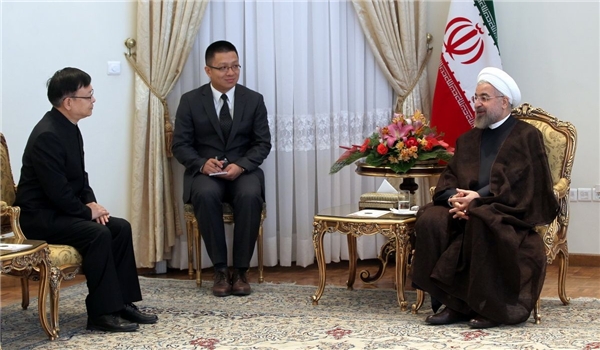 TEHRAN (FNA)- Iranian President Hassan Rouhani asked Beijing to strive to play a more effective role in the nuclear talks between Tehran and the Group 5+1 (the US, Russia, China, Britain and France plus Germany) to help the negotiations end in positive results.

“Iran and China have had valuable cooperation in the field of peaceful nuclear technology since the past, and today, we want China to make more efforts within the framework of the negotiations between Iran and the G5+1 so that both sides can reach a comprehensive and final agreement,” Rouhani said in a meeting with new Chinese Ambassador to Tehran Pang Sen on Monday.

He underlined that Tehran attaches much importance to the development of relations with Beijing, and added that China helped Iran during the Iraqi-imposed war (1980-1988) and while the country was sanctioned by the western powers, stressing that Tehran will never forget these friendly ties.

Pang Sen, for his part, underlined Beijing’s support for Iran’s right to use peaceful nuclear technology as well as its opposition to unilateral sanctions against Tehran, and assured that it will support the Islamic Republic’s position in future Iran-G5+1 negotiations.

During the meeting, Zarif underlined Tehran’s efforts to materialize its right to use peaceful nuclear technology, and said reaching a final deal between Iran and the world powers is possible if the later avoids raising excessive demands.

“We pursue Iran’s righteous rights, and attainment of an greement will be possible if certain sides show seriousness and avoid raising excessive demands,” Zarif said.

Elsewhere, he called for the further expansion of ties between Iran and China in all fields, specially in economic areas.

Pang Sen, for his part, referred to the nuclear talks between Iran and the G5+1, and said, “China has always stressed to the western negotiators that showing the necessary realism is needed to reach the final result.”

Representatives of Iran and the G5+1 ended their fifth round of talks on Friday over a final agreement on Tehran’s nuclear program.

Before the talks, Iran and the world powers said that they were resolved to start drafting a long-awaited final deal in the fifth round of talks, but after several days of negotiations Zarif said the opposite sides seem to lack the necessary “readiness for serious talks”.

The sixth round of talks between Iran and the G5+1 over a comprehensive final deal is slated to start in Vienna on July 2.