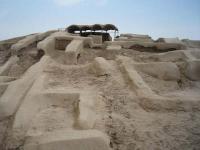 Iran’s Burnt City, a city estimated to have been built around 3200 BC, has been added to the UNESCO World Heritage list.

At the 38th meeting of the World Heritage Committee, now meeting in Doha, committee members considered the Burnt City file  and, after long discussions, approved its registration on its list.

The committee has called on Iran to show greater efforts to preserve the city and provide the committee with a report of its actions.

Iran’s Burnt City is located in Sistan in the southeast of the country. It was discovered in 1967 and has been continually excavated since the seventies, with many parts still untouched.

One of the important findings in the city was the discovery of an artificial eyeball belonging to a woman aged 32 to 36 years old. It’s the oldest prosthetic body part ever discovered.