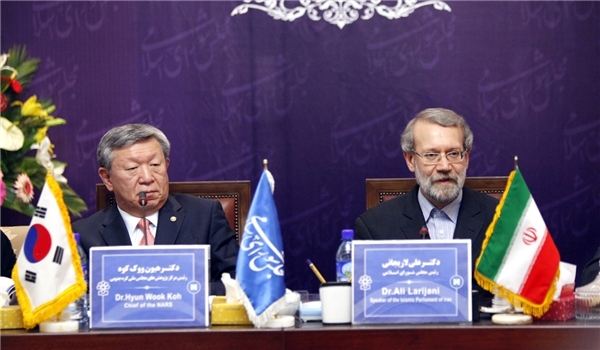 TEHRAN (FNA)- Iranian Parliament Speaker Ali Larijani underscored the necessity for the expansion of relations between Tehran and Seoul, and said Iran can use South Korea’s experiences to accelerate its economic progress.

“South Korea enjoys a developed economy and has made progresses which can be useful for us,” Larijani said in Tehran on Sunday in a ceremony in which the research centers of the Iranian and South Korean parliaments signed a Memorandum of Understanding (MoU) to increase mutual cooperation.

He underlined good cooperation between Iran and South Korea, and said parliamentary cooperation can lead to further intimacy between the two countries in political fields.

Larijani expressed the hope that the MoU could lead to the development of cooperation between Iran and South Korea, and said, “Today, different issues, including international problems, influence the domestic situation of countries and research cooperation can be effective in their settlement.”

A research delegation, headed by Head of the South Korean parliament’s Research Center Hyun Wook Koh, arrived in Iran on Saturday to meet with a number of Iranian officials.

Today’s agreement on research cooperation by the Iranian and Korean parliaments was signed by Wook Koh and his Iranian counterpart Kazzem Jalali.

Jalali had earlier made a trip to South Korea in 2013 to attend the 4th international seminar of parliamentary research centers.