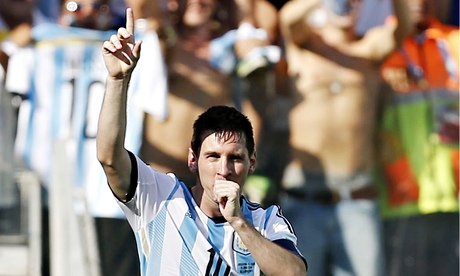 If Argentina were perhaps fortunate to beat Iran 1-0 with a stoppage-time goal in Belo Horizonte, a result that means La Albiceleste are through to the last 16, their luck was twofold. They might have already been behind to an Iranian team who had three good chances of their own. But mainly Argentina are simply lucky to have Lionel Messi, who afterwards described his stoppage-time winner as a “wonderful moment”.

“As soon as I got the ball at the end we were all in attack because we wanted to put Argentina through with a win,” Messi said. “Obviously I was very happy with the strike and then I heard people screaming and smiling.

“[Iran] were able to close us down at the back and it was very difficult to find space. It was very hot too. But we still had many opportunities in the first half; they had some in the second half too. Now we’re qualified for the next round and that was our objective today.”