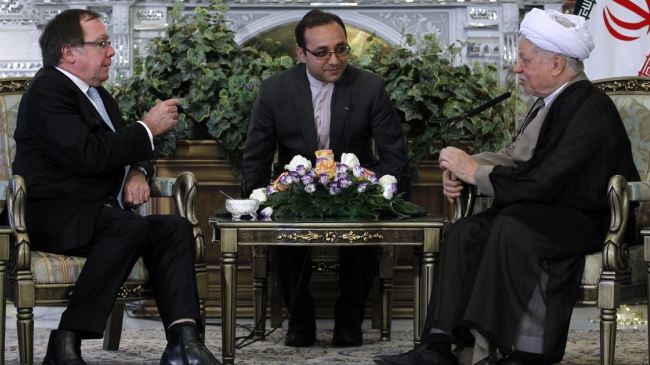 Chairman of Iran’s Expediency Council Ayatollah Akbar Hashemi Rafsanjani says Iraq is currently faced with a complex situation, stressing that Iran never seeks to interfere in the internal affairs of any country.

“We do not want to interfere in the internal affairs of countries and we hope we will be a good mediator to extinguish the flames [of the crisis in Iraq],” Rafsanjani said in a meeting with New Zealand’s Minister of Foreign Affairs Murray McCully in Tehran on Sunday.

Rafsanjani added that Takfiri militants have turned internal differences in Iraq into a bloody conflict.

He expressed concern over the ongoing developments in the Middle East and said Takfiri militants, as the worst terrorist group in the history, along with remnants of the ousted regime of executed Iraqi dictator Saddam Hussein have created a “difficult situation” for oppressed civilians in Iraq.

The Takfiri militants, led by the so-called Islamic State of Iraq and the Levant (ISIL), have overrun most of one province and parts of three others north of Baghdad. The terrorists also captured four cities as well as a border crossing with Syria during Friday and Saturday clashes in Anbar Province.

Iraqi Prime Minister Nouri al-Maliki has repeatedly blamed Saudi Arabia and Qatar for the security crisis and growing terrorism in his country, and denounced the Al Saud regime as a major supporter of global terrorism.

Elsewhere in his remarks, Rafsanjani said the expansion of ties between Iran and New Zealand would serve the two countries’ interests.

The New Zealand foreign minister, for his part, pointed to Iran’s role in the international equation and called on the Iranian government and nation to use its capabilities to end the ongoing conflict in Iraq.