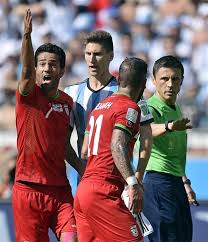 ‘Argentina won because of the referee’ says one of Iran’s dailies, part of a wider rumble in Iranian media Sunday over the defeat

Before the match even started, the coach pledged his team would not be defeated.

And yet despite coach Carlos Queiroz’s insistence that Iran would defeat Lionel Messi’s Argentina on Saturday in the most “eagerly anticipated” match in the country’s history, the team lost to Argentina 1-0.

But the South American victory at Belo Horizonte has not been without criticism.

On Sunday, Iranian media lamented the “injustice” of Serbian referee Milorad Mazic’s decision to turn down a penalty appeal against heavyweights Argentina in their World Cup encounter.

The penalty, if awarded, could have been a turning point in the match in which Iran put up an effective defence only to be defeated by a stunning injury-time strike from Messi.

“Argentina + the referee 1, Iran 0,” read the headline by Jam-e-Jam newspaper, next to a photo of Iranian forward Ashkan Dejagah going down in the box in a tackle by Argentine defender Pablo Zabaleta.

“Argentina won because of the referee,” the Quds paper said, with the government-run Iran daily lamenting that “Iranian stars (became) victims of injustice.”