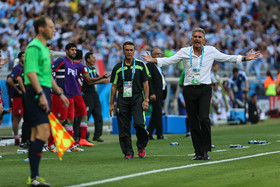 BELO HORIZONTE, Brazil (AP) — Iran coach Carlos Queiroz questioned how the referee in Saturday’s 1-0 World Cup loss to Argentina will be able to sleep at night after ignoring claims for a penalty.

Referee Milorad Mazic didn’t point to the spot when Argentina right back Pablo Zabaleta challenged Ashkan Dejagah in the second half as the midfielder was running toward goal.

“It should have been a penalty and red card. There’s no excuse. There’s nothing that can explain (why) this Serbian referee (did) not give the penalty,” Queiroz told reporters after the game.

“How can this guy sleep tonight, or for the rest of his life?” Queiroz continued. “With all respect, I would like to have the opportunity to have a one-on-one conversation with him. Why did he do that to us?”

Argentina coach Alejandro Sabella said that from where he was sitting it didn’t look like a penalty because he got the impression Zabaleta went for the ball and not the Iranian player.

Zabeleta also said the referee made the right call.

“It wasn’t a clear penalty situation,” he said.

Television replays appeared to show Zabaleta making contact with the ball before bringing down Dejagah.

Lionel Messi scored in stoppage time to give Argentina a 1-0 victory.