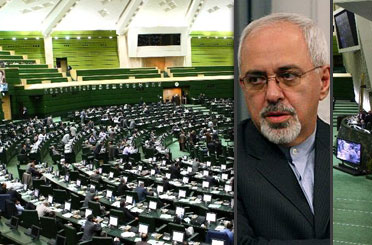 TEHRAN, June 21 (MNA) – A member of Iran’s parliament National Security and Foreign Policy Commission has said they have invited FM to report on nuclear negotiations.

Mohamamd Saleh Jokar, Yazd’s representative to the parliament told Mehr News that after nuclear negotiations between Iran and the world powers the foreign ministry would come to parliament to report to the Parliament.

“Zarif will answer questions on progress in the negotiations, issues of discord, and positions of Powers on Tehran nuclear program,” added Jokar.

The fifth round of political-level  nuclear negotiations between Iran and the 5+1 group – US, UK, China, Russia, France plus Germany –  were held in the Austrian capital of Vienna which ended in Friday June, 20.

The current process of negotiations between Iran and the major powers are meant to build on the landmark interim nuclear deal they clinched last November in Geneva.

Under the Geneva deal, Iran agreed not to expand its nuclear program for six months in exchange for limited sanctions relief. The agreement came into force on January 20. Iran and the major powers have set a July 20 deadline to clinch a long-term nuclear deal. The deadline can be extended by another half year if both sides agree.