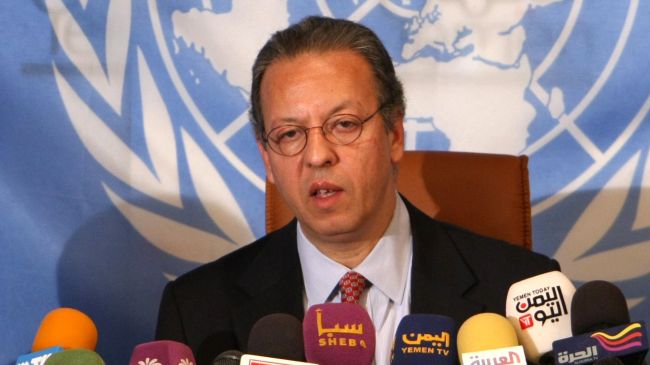 No word on abducted Iranian diplomat in Yemen: UN

The UN envoy to Yemen says he has no information on the fate of the Iranian diplomat abducted in the Arab country last year.

Jamal Benomar made the remark about Nour Ahmad Nikbakht in a recent interview following a meeting of UN Security Council on the developments in Yemen.

Earlier on Wednesday, Iran’s Deputy Foreign Minister for Arab and African Affairs Hossein Amir-Abdollahian said that Nikbakht is “in full health” and expressed hope that he will be freed as soon as possible.

Earlier this year, Yemeni charge d’affaires to Tehran Abdullah Ali al-Seri, said Nikbakht is alive and in good health, emphasizing that the Yemen Interior Ministry and security forces are responsible for investigating the fate of the kidnapped Iranian diplomat.

On January 18, another staff member at the Iranian Embassy in Sana’a, Abolqasem Asadi, was gunned down by members of a terrorist group outside the Iranian ambassador’s residence in the Yemeni capital.

The assailants first tried to kidnap the Iranian diplomat, but opened fire on him when they faced resistance. Seriously injured, the diplomat later passed away in hospital.