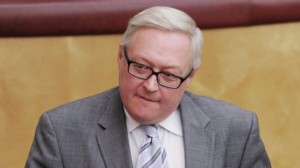 Moscow advocates only temporary limitations on Iran’s nuclear program, Russia’s Deputy Foreign Minister and nuclear negotiator Sergei Ryabkov said Friday, as the fifth round of six-party talks between Iran and P5+1 ended in the Austrian capital.

“The position of the Russian side is that we need to agree on the combination of measures that would be enough to revive the trust in the purely peaceful nature of Iran’s nuclear program. When we reach this goal and anchor it through a relevant checking mechanism, there should be no restrictions on the Iranian nuclear program either quantitative, or in terms of centrifuge types,” he said.

Iran’s Foreign Minister Mohammad Javad Zarif said earlier the question about the number of centrifuges for uranium enrichment was not discussed at the recent talks – only their capacity.

Ryabkov said the period necessary to restore the international trust in the peaceful nature of Iran’s program may be long.

“I am not talking about when these restrictions are removed, how much time will pass, or what is necessary to restore this trust. But after the cycle, restrictions on Iran’s nuclear program must be removed,” he said.

The talks between Iran and the P5+1 group ‘Russia, Britain, France, China, the United States plus Germany’ aimed at reaching an agreement to curb Iran’s nuclear program took place in Vienna June 16-20.

The talks concluded with framing the text of the deal, which the parties agreed to sign on July 20 during the Geneva round in November 2013.

The group of six major powers wants Iran to scale back its nuclear program to make sure it won’t build an atomic weapon, while Iran insists the purpose of its uranium enrichment program is absolutely peaceful.