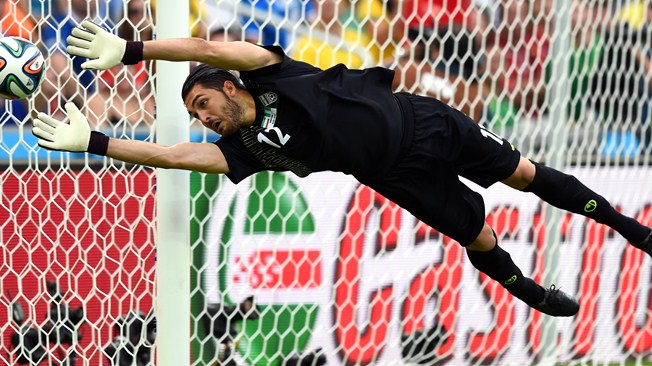 Iran have produced a number of excellent goalkeepers down the years, stalwarts between the sticks who left their mark on an era and helped the national team impress on the continental and global stage. Having won the trust of Carlos Queiroz to start against Nigeria, Alireza Haghighi is beginning to look like he could follow in that fine tradition.

The three-time Asian champions are back at the FIFA World Cup™ after missing out on South Africa 2010, and among the biggest mysteries as they prepared for Brazil 2014 was who would end up wearing the gloves. With Mehdi Rahmati retiring from international football last year, a number of options seemed possible, but it was Haghighi who got the nod for Iran’s opening encounter.

The 26-year-old promptly justified his selection with a solid display, which helped Team Melli clinch a 0-0 draw against the champions of Africa. Significantly, it was Iran’s first ever clean sheet in a World Cup game.

“It’s what I dreamt about,” Haghighi told FIFA.com after making his World Cup debut. “I wanted to wear the Iran shirt and I achieved that. Like I said in an earlier interview with FIFA.com, it was also my goal to play in the World Cup and I’ve been able to do that too, thanks to God. I’m proud to have kept goal for my country and to have not let the ball get past me. Of course, that wouldn’t have been possible without the help of my team-mates.”

Iran’s defence was certainly impressive against Nigeria, to the extent that Mehrdad Pooladi sat second behind Germany star Thomas Muller in the Castrol Index after the first round of matches. “It was a team effort and I’m very pleased about it,” added Haghighi. “I did everything to succeed. The work all our players put in allowed us to finish the match without conceding.”

Haghighi’s own performance was perhaps not surprising given that he was coached by one of the most outstanding Asian keepers of the 1990s in Ahmad Reza Abedzadeh, who guarded the posts for Iran at France 1998. In addition, he received plenty of advice from Nasser Hejazi before the legendary No1 passed away. “Nasser Hejazi gave me a lot of guidance on the work of a goalkeeper, as did my old coach at Perozi, Ahmad Reza Abedzadeh, who told me about the World Cup,” explained Haghighi.

I want to thank them for all the positive energy they’ve transmitted to me and for their unflagging support.

Alireza Haghighi on his Iran team-mates

The Tehran native likewise feels a debt of gratitude to Daniel Davari and Rahman Ahmadi, his goalkeeping colleagues in the Iran squad – and both his senior. Haghighi believes the sense of family within the Team Melli ranks also had an impact on their positive opening result.

“Even if we’re in competition on the pitch, we remain good friends and share the same goal,” he said. “People were able to see our great friendship at half-time and the end of the match. Thanks to that harmony, we were able to keep our goal unbreached against Nigeria. I want to thank them for all the positive energy they’ve transmitted to me and for their unflagging support.”

Queiroz’s charges are now fully focused on their next encounter against Argentina, which is likely to put them under close scrutiny. Not only do their Group F rivals boast an array of fearsome attacking talents, they are desperate to add a third star to their shirts on South American soil.

Haghighi is not unduly concerned, however. “Argentina are without doubt one of the three best international teams in the world at the moment, with good players who are based at big clubs,” he said. “But Iran always excel in tough situations. I can guarantee you that we’ll show you a lot of good things on the pitch.”

The prospect of facing four-time FIFA Ballon d’Or winner Lionel Messi might give many goalkeepers sleepless nights, but Haghighi – who spent last season on loan at Sporting Covilha in Portugal – insists he is ready for the occasion. “Personally, I’m not tense or bothered about that,” he said. “Lionel Messi is one of the best players in the world, but I’ll surpass myself for my country. Playing in Europe has given me a lot of experience and I’m convinced that’ll serve me well in the match against Argentina and the other games.”

What is certain is that La Albiceleste will provide Haghighi with a stern examination as he vies to keep a second clean sheet at Brazil 2014.