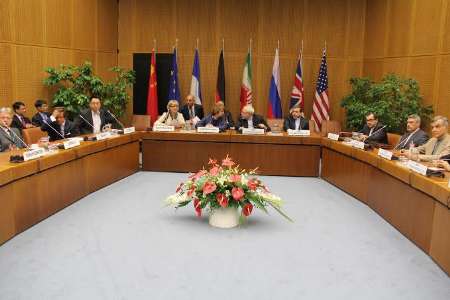 Earlier this day, Iranian Foreign Minister Mohammad Javad Zarif announced that Iran and the Group 5+1 (the US, Russia, China, France and Britain plus Germany) have started writing the text of final agreement or the Comprehensive Joint Plan of Action.

Zarif and his accompanying team of negotiators arrived in Vienna Monday morning to participate in the fifth round of talks between Tehran and the six major world powers in the Austrian capital from June 16-20.

Upon arrival at Vienna airport, Zarif told reporters that Iran and the G5+1 have one month to reach a comprehensive deal and ˈIf the other side is ready, we will (also) be prepared to draft the final agreement.ˈ

Zarif also referred to the fatwa (religious decree) issued by Supreme Leader of the Islamic Revolution Ayatollah Seyyed Ali Khamenei against the production and use of nuclear weapons, and said it provides an objective guarantee to ensure the opposite sides that Iranˈs nuclear program will remain peaceful.

Iran and the six world powers last met in their fourth round of talks in Vienna from May 14-16. Since the November deal, the seven nations have been discussing ways to iron out differences and start drafting a final deal that would end the West’s dispute with Iran over the country’s nuclear energy program.