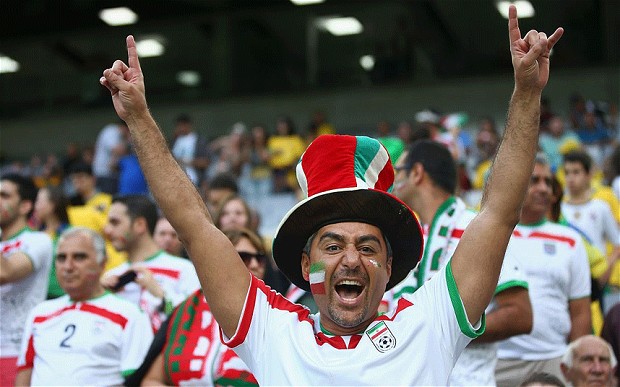 Well supported: Iran has one of the largest fan contingent’s in Brazil Photo: GETTY IMAGES

The loud belly laughs emanating from the Sao Paulo training base of the Iran national team are not what you might readily expect from the supposedly most secretive and mysterious nation at the World Cup.

Ali Kafashian, president of the Iranian Football Federation, has just been asked by an American journalist about reports that the Iran players have been instructed not to exchange shirts on Saturday with the Argentina team. “If Mr Lionel Messi wants all 10 Iran shirts, he can have them,” he says, smiling.

It is later claimed that the original story had rather spiralled out of control after Kafashian himself had made a joke about the limitations of the Iran Football Federation’s budget. Those restrictions make it almost certain that the £1.2 million-a-year contract of manager Carlos Queiroz will not be extended after the World Cup, although the players have been promised a shared £600,000 bonus from Fifa prize money should Iran achieve the unprecedented feat of reaching the last 16