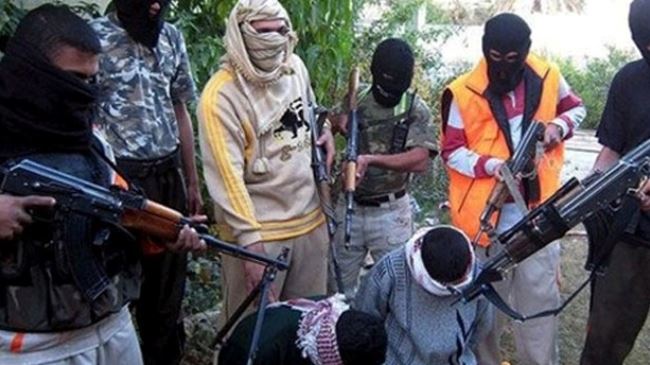 US must fight terrorism in practice: Iran’s VP

Iran’s First Vice President Es’haq Jahangiri says the United States must fight against terrorism in practice, stressing that violence and terrorism should be eliminated from the region.

Given the fact that Iraq has now a legal and popular government, an ideal opportunity has been provided for the Americans to show their fight against terrorism in practice if they are honest, Jahangiri said in an interview with Venezuela’s teleSUR television network.

“We have good relations with the Iraqi government and believe that all should pay heed to stability in Iraq,” he added.

He said many extremist and terrorist groups organized in Syria have infiltrated into Iraq and fomented insecurity in many Iraqi cities.

The Iranian vice president expressed confidence that the Iraqi government and nation would succeed in driving the so-called Islamic State of Iraq and the Levant (ISIL) militants out of their country.

Terrorist groups suffered a heavy defeat in Syria, but the ISIL Takfiri militants are bent on stoking insecurity in Iraq, he said.

“The ISIL knows no boundaries. If it gains power, it will also attack countries supporting it. The Syrian crisis was in fact an opportunity for terrorist groups to organize and collect forces from different states,” Jahangiri pointed out.

He once again expressed Iran’s preparedness to help the Iraqi government in its combat against terrorism, saying, “If the country’s government calls for help, we will help them, but we haven’t dispatched any military troops to Iraq so far” he said.

Iran’s President Hassan Rouhani on June 14 dismissed reports about the deployment of Iranian forces in Iraq, but expressed Tehran’s readiness to provide any help upon Baghdad’s request to fight the Takfiri militants.

“If Iraq wants any help from us, we will study it. There has been no request from us so far. We are prepared to provide any assistance but within the framework of international law and based on the Iraqi people’s demands,” President Rouhani said.

On June 10, the ISIL militants took control of Mosul, the capital of Nineveh Province, in a lightning advance, which was followed by the fall of Tikrit, located 140 kilometers (87 miles) northwest of the capital Baghdad.

Hundreds of thousands of people have been forced out of their homes since then.

The ISIL militants have vowed to continue their raid towards Baghdad. Iraqi Prime Minister Nouri al-Maliki has said the country’s security forces would confront the terrorists, calling the seizure of Mosul a “conspiracy”.