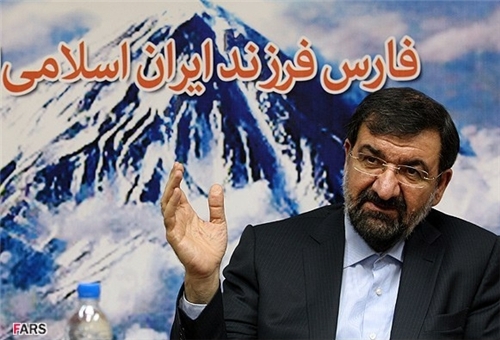 EC Secretary: Iran not to cooperate with US in Iraq

TEHRAN (FNA)- Secretary of Iran’s Expediency Council Mohsen Rezayee underlined that Tehran will never accept to cooperate with the US over the terrorists’ attack in Iraq.

“Iran will not accept to stay beside the US,” Rezayee told reporters on Wednesday.

He underlined that the US, Israel and Saudi Arabia have created the radical Takfiri current after they faced a deadlock against the wave of the Islamic awakening.

“The ISIL is a scenario of the intelligence organizations of the US, Israel and some regional countries to carry on with their plots,” Rezayee said.

He also pointed to Turkey’s role in supporting the ISIL, and said, “Turkey has been informed of the ISIL move, but the extent of the role played by Ankara is not known.”

In relevant remarks on Saturday, Iranian Interior Minister Abdolreza Rahmani Fazli underlined that Iran is willing to support its neighbors against the flow of Takfiri and terrorist groups, but not by sending military forces to those countries.

“Such supports do not mean dispatching forces, but condemning terrorist moves and closing the borders are their meaning,” the Iranian interior minister said, addressing the administrative council meeting of North Khorassan province.

Yet, the Iranian interior minister reiterated that Iran supports its neighbors against the Takfiri and terrorist groups.

“We are responsible before God and our neighbors and, hence, support these countries,” Rahmani Fazli said.

The US Wall Street Journal in a report on Friday claimed that Tehran has sent two elite units of its Islamic Revolution Guards Corps (IRGC) to Iraq to fight against the Islamic State of Iraq and the Levant terrorists – an Al-Qaeda offshoot.

A few hours later on Friday, Iranian Deputy Foreign Minister Hossein Amir Abdollahian categorically rejected the report, and told FNA that “the dispatch of Iranian military forces to Iraq is not true”.

Iraq’s Foreign Minister Hoshyar Zebari did not confirm the WSJ report when asked if Iran’s IRGC was entering the fight.

“Frankly I have no idea about that. I am in London now,” he told the WSJ in a phone interview.

In Tehran, Foreign Ministry Spokeswoman Marziyeh Afkham had already stressed that Iran is not involved in the clashes in Iraq, saying, “Until now we haven’t received any requests for help from Iraq. Iraq’s army is certainly capable in handling this.”

“We need to take advantages of Iran’s abundant potentials and capabilities, and meantime, resort to national unity and solidarity to remove all barriers in the way of our country’s all-out development,” Rezayee said on Friday.

Nothing is more important than unity, intimacy and cooperation among the people, Rouhani said at the time.

In light of national unity, the nation will pass over all the difficulties, he added.