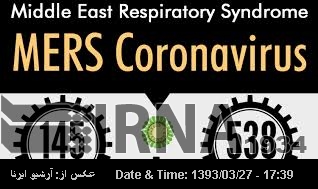 Wednesday edition of the English language daily Iran Daily quoted Alireza Janbakhsh as adding that in previous years, coronavirus was evident in the form of severe acute respiratory syndrome (SARS) in East Asia. Currently, it has emerged as MERS in Saudi Arabia, he said.

The disease is prevalent in Persian Gulf littoral states and in some instances, cases have been reported in Canada, France, and the UK.

The virus can be transmitted via respiratory droplets. The symptoms of the disease appear after an incubation period of between 10 and 14 days. Early symptoms include fever, body aches, nausea, vomiting, and diarrhea. If the patient is not cured in seven days, respiratory symptoms such as breathlessness, wet cough, and respiratory failure appear.

He put the mortality rate at 30 percent. Currently, out of 600 MERS patients worldwide, 200 have lost their lives, he said.

Janbakhsh said those with cardiovascular, liver, and kidney problems as well as HIV patients are highly exposed to MERS virus. Also, the elderly and children below the age of 10 are other vulnerable groups.

There is no vaccine or specific treatment for MERS, which has killed more than 175 people in Saudi Arabia and spread throughout the region. It has also reached countries as far as Malaysia, Greece, Lebanon and the United States.