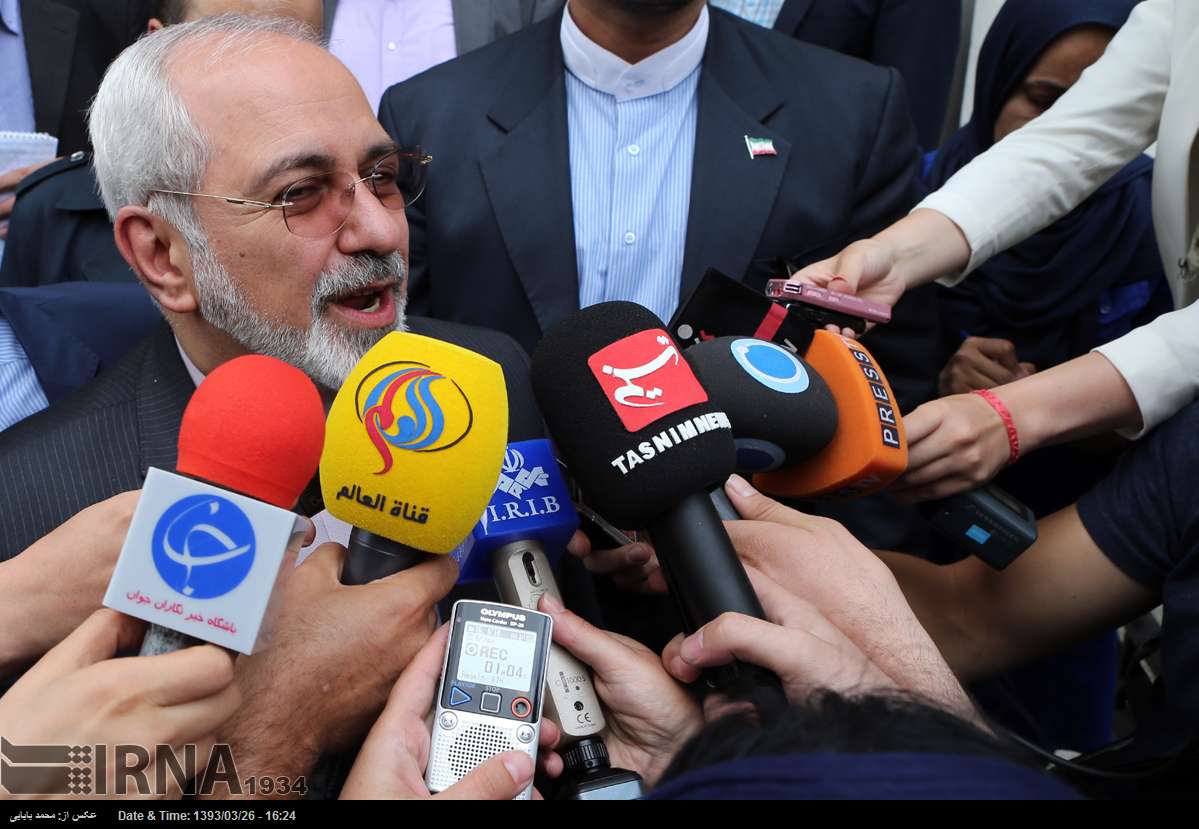 Iran daily: FM Zarif “we only discussed nukes with US, Not Iraq”

Iran’s Rouhani Government continued on Monday to pull back — at least publicly — from its initial embrace of talks with US over the Iraq crisis, amid opposition from the Supreme Leader’s office and other factions.

Foreign Minister Mohammad Javad Zarif said that Iran discussed “only…the Iranian nuclear energy program” in Vienna with the 5+1 Powers, as the two sides opened their fifth round of negotiations for a comprehensive nuclear agreement.

The remark was in contrast to that from a “senior State Department official”,, who said Iraq was discussed on the sidelines at Vienna.

The official said, “We are open to engaging the Iranians, just as we are engaging other regional player son the threat posed by ISIS in Iraq,” while ruling out any “military co-ordination or strategic determinations about Iraq’s future”.

Zarif did acknowledge that he had spoken by phone with British Foreign Secretary William Hague about the Iraqi situation.

Last week, as insurgents moved rapidly across northern Iraq, senior officials in the Iranian Government invited the US to talk. “We are very influential in Iraq, Syria, and many other countries,” one said.

However, other leading officials pushed back the idea. Speaker of Parliament Ali Larijani, often used as a channel for the Supreme Leader’s views, accused the US of fostering the jihadist Islamic State of Iraq and as-Sham. Over the weekend, the Secretary of the National Security Council, Ali Shamkhani, reiterated the allegation.

On Monday, the Supreme Leader’s office put the message out on Twitter:

And Shamkhani repeated the line in a meeting with the Prime Minister of the Kurdistan Regional Government, Nechirvan Barzani: “The current crisis in Iraq is result of the interference and collusion of the Western and regional enemies of the Iraqi nation with the purpose of preventing the will of the country’s people.”

President Rouhani takes a break from domestic and international tensions to watch Iran’s first World Cup match, a draw against Nigeria — and then his office posts the news on Twitter:

Britain to Re-Open Embassy in Tehran

William Hague has announced that Britain’s embassy in Iran will be reopened as the west looks to Tehran to help ease the crisis in neighbouring Iraq.

The foreign secretary said the circumstances are right to restore the diplomatic base after a significant thawing in relations over recent months.

“Our two primary concerns when considering whether to reopen our embassy in Tehran have been assurance that our staff would be safe and secure, and confidence that they would be able to carry out their functions without hindrance,” Hague told MPs in a written statement.

“There has never been any doubt in my mind that we should have an embassy in Tehran if the circumstances allowed.

“Iran is an important country in a volatile region, and maintaining embassies around the world, even under difficult conditions, is a central pillar of the UK’s global diplomatic approach.

“I have therefore now decided the circumstances are right to reopen our embassy in Tehran.”

Rouhani Orders Investigation of Ban on Women at Football Matches

President Rouhani has ordered an investigation of whether women can be allowed into football matches, according to Shahindokht Mollaverdi, the Vice President for Women’s and Family Affairs.

Mollaverdi said she had objected in the last Cabinet meeting to the ban on women in stadiums. She said Rouhani has called for explanations and talks have been held with the Sports Minister.

“Women were allowed to attend matches in stadiums in the past (Ahmadinejad) Government, but the new restrictions on women to enter stadiums…is quite surprising; the cabinet should revive hopes of the young generation of women through proper measures [lifting the ban on women’s presence in stadiums,” Mollaverdi wrote on Facebook.

The ban on women at sporting events has also been highlighted by recent international volleyball matches, amid Iran’s historic defeats of world power Brazil.

After more than 50 women were barred from Tehran’s Azadi Stadium during an Iran-Brazil match, the head of Iran’s Volleyball Federation, Mammoud Afshardoost, said the ban reflected negatively on the Islamic Republic.