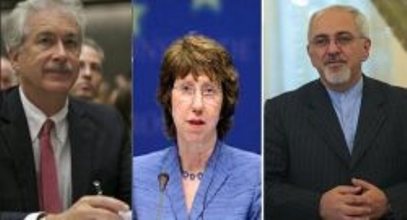 End of 2:30 hours of talk between Zarif, Ashton, Burns in Vienna

The senior negotiators discussed issues to decrease differences and make viewpoints closer to each other before beginning compiling comprehensive agreement text.

The trilateral meeting took place after a working lunch between Ashton and Zarif.

In the working lunch, the two sides exchanged views on issues which will be proposed in the official talks between Iran and Group 5+1 in the way of beginning to compile joint comprehensive agreement text.

The US Assistant Secretary of States William Burns, who had more than 11 hours of discussion last week with Iranian Foreign Minister Deputies Abbas Araqchi and Majid Takht-e-Ravanchi in Geneva, Switzerland came to Vienna again today to accompany with the US negotiating team to follow up his discussions with the Iranian side.

After the working lunch with Ashton, Zarif said that the issues would be discussed again tomorrow in the general meeting with Group 5+1.

The official meeting between Iran and Group 5+1 is due to start on Tuesday June 17, 2014 at the UN Headquarters in Vienna at 11.

Zarif told reporters that after Tuesday meeting, it would be necessary to have technical and bilateral meetings to find out a base to start compiling common text.