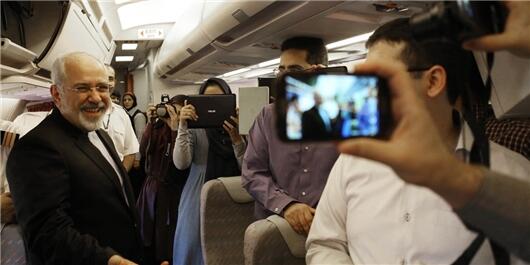 TEHRAN (FNA)- Iranian Foreign Minister Mohammad Javad Zarif who is in Vienna to hold a fresh round of talks with the world powers on Tehran’s nuclear program, said Iran will win its World Cup opening match against Nigeria today.

Iran and Nigeria are due to face each other in their first game of the World Cup Monday afternoon.

“We will win,” Zarif told FNA on a flight from Tehran to Vienna on Monday morning.

The Iranian top diplomat expressed the hope that the Iranian team of negotiators and the reporters accompanying the team will have time to watch the Iran-Nigeria match.

The men’s national football team of Iran ranks 1st in Asia and 43rd in the world according to the June 2014 FIFA World Rankings.

Iran play in the World Cup finals for the fourth time after 1978, 1998 and 2006 have been drawn in Group F alongside Argentina, Nigeria and Bosnia-Hercegovina.

Meantime, Iran coach Carlos Queiroz already has plenty of World Cup experience, and the country’s national team will be hoping to make the most of it in Brazil.

“Iran has faced difficulties off the pitch but we want to make our point on the pitch,” the 61-year-old Portuguese coach said.

“The players will want to walk away from Brazil with respect and pride. We also want people to have an understanding of Iran and we want to bring joy to the Iran fans,” the Iran Coach added.

Triple Asian champions Iran are taking part in their fourth World Cup finals after 1978, 1998 and 2006 but have never got out of the group stage.

“When we qualified for the World Cup we knew that we must be able to play at higher level. We worked hard and we are very satisfied with our preparations. It wasn’t easy to raise the level of Iran Football Team. we did what we needed to do and now we are ready to face the best in the world and show we deserve our place at the World Cup,” Queiroz underlined.

“Their national team is made up of many stars, big players and they have a big advantage in terms of experience,” he said.

“It’s a very difficult match for us but we can draw on the spirit in the squad. They are favourites but nobody is strong enough to win every match and nobody is weak enough to lose them all,” he added.

“This is my squad. Iran play for passion. it’s amazing to have this loyalty and affection,” the Iran Coach stressed.

As millions of Iranians, and millions more in Nigeria, are waiting for the two sides’ World Cup opening match, sources in the Iranian camp in Brazil revealed the likely lineup of the Asians for their Monday match.

According to the sources, the likely lineup arranged by Iran’s manager Carlos Queiroz will be as follows: