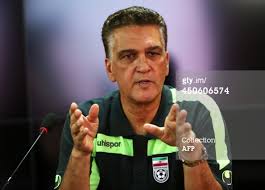 Connecticut resident Dan Gaspar coaches Iran’s goalkeepers, but he’s more concerned about what happens on the field than the geopolitics of the sport

In the unlikely event that the U.S. and Iran face each other in the 2014 World Cup, at least one Iranian coach is not going to have trouble discussing sports and politics with American players. Because Dan Gaspar, Iran’s goal-keeping coach, is an American who lives in Connecticut.
The proprietor of Star Goalkeeper Academy and University of Hartford head coach is part of the most diverse staff in the World Cup. Iran’s head coach is Portugal’s Carlos Queiroz, who can also claim staffers from Australia, Mozambique and Cape Verde. “It’s been a fantastic experience these last three years in Iran,” Gaspar tells TIME. “I’ve never felt being an American was a detriment. I have found it interesting, and everyone has been very respectful.”

Of the 32 teams in Brazil, Iran has been given the slimmest chance of advancing, a prediction the Iranians have used as a motivating factor. Indeed, just getting to Brazil was a struggle. An unexpected win over South Korea, in Seoul, in the Asia qualifying tournament punched their ticket there. For Gaspar, it was the culmination of a three-year effort led by Queiroz to get Iran back into a World Cup final. Queiroz is one of soccer’s master coaches and a mentor to Gaspar, who is of Portuguese descent. He was on Portugal’s staff when Queiroz led that team in South Africa in 2010. “Once you catch that bug, you want to relive that experience,” Gaspar says.

Even in Iran? Although he was not exactly encouraged by friends and family to take the job, it proved irresistible. “Professionally it was an opportunity to work in a different part of the world. I’ve always been adventurous from a football and cultural standpoint,” he says. Soccer inevitably gets tied up in politics in most countries, and that was certainly the case in 1998 when Iran beat the U.S., 2-1, in Lyon, France, setting off joy in Iran. In that game, players on both teams took a joint pregame photo instead of the traditional individual team photos to underline sport above politics. This year, the global politics are getting more intertwined too: Shi‘ite Iran backs the Syrian government against some Western-funded Sunni rebels. But at the same time the U.S. and Iran have common cause against Sunni jihadists who are now besieging Shi‘ite-ruled Iraq, where U.S. investment in both blood and money has been huge.

Political tangles are not Gaspar’s issue. In Brazil, as in all World Cups, the coaching staffs live in the cocoon of competition and can’t look beyond the next game. Iran is considered easy pickings in its group with Nigeria, Argentina and Bosnia-Herzegovina. Most of the team plays in the obscure Iranian professional league, not in Europe’s topflight competition. “It’s quite a challenge. We look it as an advantage — our guiding principle has always been team above individual,” says Gaspar. “We have established a team that is humble, committed, that’s willing to follow a discipline that we have created.” With such a polyglot staff, the biggest issue is communication — not necessarily translating words, but in understanding the language of soccer, of emotions.

Iran has been training in South Africa to prepare for its first game against Nigeria on Monday. Gaspar promises that the team is ready, having prepared a flexible formation to adapt to whatever the Nigerians can throw at them. And he got a good look at Nigeria recently when the U.S. team played the Super Eagles in a pre–World Cup friendly. The Yanks beat Nigeria 2-1, and looked good doing it. “I was very impressed with their performance against Nigeria,” he says. “They couldn’t come to Brazil any better prepared.” If Iran can do likewise, the American in Tehran will be off to a great adventure.