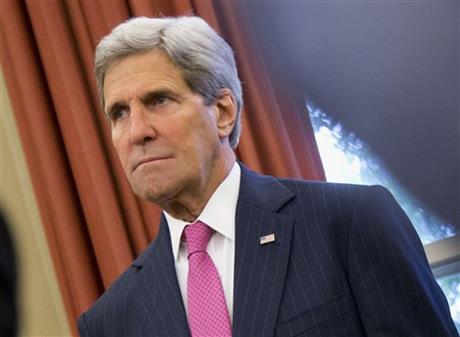 FILE – This June 12, 2014 file photo shows Secretary of State John Kerry listens during a meeting between President Barack Obama and Australian Prime Minister Tony Abbott, in the Oval Office of the White House in Washington. With Baghdad threatened by the advance of an al-Qaida-inspired insurgency, the State Department is reinforcing security at the U.S. Embassy in Iraq’s capital _ and sending some personnel out of town. Kerry made calls to foreign ministers in Jordan, the United Arab Emirates, Saudi Arabia and Qatar to discuss the threat and the need for Iraqi leaders to work together. (AP Photo/Pablo Martinez Monsivais, File)

Kerry: US open to talks with Iran over Iraq