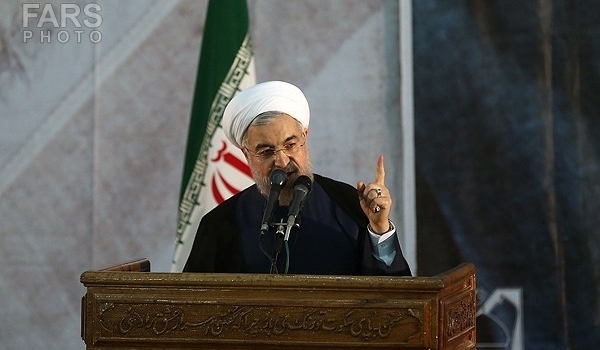 TEHRAN (FNA)- Iranian President Hassan Rouhani lashed out at the trans-regional states for supporting the terrorist Takfiri groups which have intensified their attacks against certain countries of the region, including Syria and Iraq.

A senior Iranian legislator, Bahram Beiranvand, quoted President Rouhani as saying in a recent meeting with a number of lawmakers that “extremist elements in different countries have paved the ground for their presence in the region and have created some problems for the regional countries”.

The Iranian president also referred to the emergence of the Takfiri groups in the region, and underlined the role of the trans-regional states in creating these groups, Beiranvand told FNA on Monday.

According to the MP, Rouhani stressed that the enemies which are concerned about the existing unity in the Muslim world are attempting to turn this unity into animosity and discord.

Iranian officials have repeatedly warned against the supports extended by certain world powers and their regional allies to the spread of Takfiri currents in the Middle-East.

They have repeatedly warned those states that are supporting Salafi and Takifiri terrorists in the region that their policy would backfire and the same groups would eventually target them as well.

On Thursday, Commander of Iran’s Basij (volunteer) Force Brigadier General Mohammad Reza Naqdi condemned the crimes committed by Takfiri and Salafi groups in different regional states, specially in Syria and Iraq, and said these groups which are supported by the US have scratched the beautiful face of Islam.

Addressing a gathering in the Southeastern province of Sistan and Balochestan, Naqdi said that the US is manipulating the Takfiri terrorists to tarnish the image of Islam and the Muslims.

He, meantime, underlined that although certain Western countries are trying to mislead the world people’s understanding of Islam and Muslims, the number of people converting to Islam is growing across the globe, including the US itself.

On Thursday, Iranian Foreign Minister Mohammad Javad Zarif in a telephone conversation with UN Secretary General Ban Ki-moon warned against the threat posed by Takfiri and Salafi groups to Iraq and the Middle-East.

The Iranian foreign minister also reiterated the UN responsibility to seriously and effectively support the Iraqi nation and government in fighting terrorism.