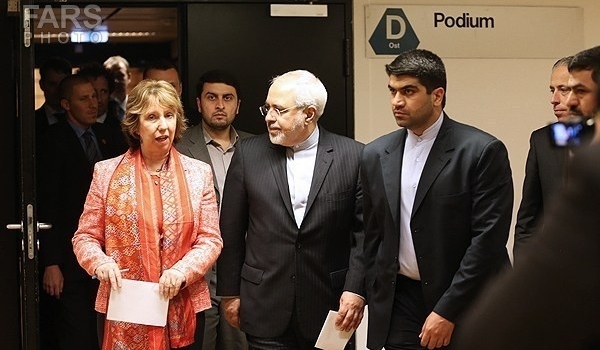 Iran, US, EU top negotiators to meet in Vienna this afternoon

are due to hold a trilateral meeting with EU Foreign Policy Chief Catherine Ashton in Vienna this afternoon, Foreign Minister Mohammad Javad Zarif said on Monday.

“Trilateral negotiations will be held among Iran, the US and Mrs. Ashton after a working luncheon (between Ashton and me),” Zarif told FNA during the Tehran-Vienna flight.

Zarif and his accompanying team of negotiators arrived in Vienna today to participate in the fifth round of talks between Tehran and the six major world powers in the Austrian capital from June 16-20.

The Iranian delegation is led by Zarif. The talks are scheduled to start by a working luncheon between Zarif and Ashton.

On Saturday, Zarif told FNA that Ashton and he have decided to meet each other for a luncheon at Iran’s office at the International Atomic Energy Agency (IAEA) headquarters in Vienna on Monday to discuss the latest developments in the talks between Tehran and the six world powers.

They will then decide if they should start the multilateral negotiations among the seven nations on Monday or Tuesday.

The two sides have said that they are resolved to start drafting a long-awaited final deal in this round of talks.

Upon arrival at Vienna airport, Zarif told reporters that Iran and the G5+1 have one month to reach a comprehensive deal and “if the other side is ready, we will (also) be prepared to draft the final agreement”.

“Whenever the other side is ready to enter talks seriously, there will be a possibility for reaching results,” he added.

Zarif also noted the fatwa (religious decree) issued by Supreme Leader of the Islamic Revolution Ayatollah Seyed Ali Khamenei against the production and use of the nuclear weapons, and said it provides an “objective guarantee” to ensure the opposite sides that Iran’s nuclear program will remain peaceful.

His remarks came after senior Iranian and German diplomats in a meeting in Tehran on Sunday stressed the necessity for the negotiating sides in the upcoming multilateral talks in Vienna to start drafting a final nuclear deal between Iran and the six world powers.

Following two hours of bilateral talks between senior Iranian and German negotiating teams in Tehran on Sunday afternoon, Iran’s Deputy Foreign Minister and senior negotiator Seyed Abbas Araqchi told FNA that the two sides exchanged views over the topics which are due to be covered in the multilateral nuclear negotiations between Iran and the G5+1 in Vienna on Monday.

“These (bilateral) talks which were carried out on the verge of the next round of negotiations in Vienna were of special importance,” Araqchi said, and added, “During the talks, the two sides laid emphasis on the need to start drafting the text of the final deal in the (Monday) negotiations.”

A team of high-ranking German negotiators arrived in Tehran on Friday to discuss bilateral ties and the latest developments in the Vienna nuclear talks in meetings with senior Iranian officials. The delegation is led by Germany’s envoy to the multilateral Iran-world powers nuclear talks Hans Dieter Lucas.

Prior to the next round of the multilateral talks, Iran and the powers decided to hold a series of talks to narrow down their differences. Thus, the Iranian negotiating team has had a series of bilateral talks with most of the members of the G5+1 during the last week.

He said that the two sides discussed issues related to the nuclear talks as Iran and the G5+1 are preparing for the next round of talks in the Austrian capital.