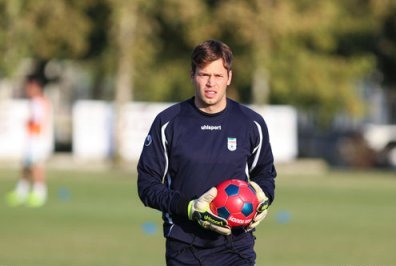 Berlin, Jun 16, IRNA — Iranian national team goalie Daniel Davari said it would be a ˈdreamˈ, if his team reaches the second round of the World Cup in Brazil.

ˈTo reach the next round would simply be a dream,ˈ Davari told the German sports website sport 1.

We can spring a surprise with ˈa good team spirit and the necessary belief in our own strength,ˈ he added.

Iran will face African champs Nigeria later tonight as part of the Group F encounters which include also football giants Argentina and Bosnia-Herzegovina.

Davari said Iranˈs role as an underdog in its group could actually serve the teamˈs goals since the other teams are underestimating his squad.

That could be our chance, the 26-year-old goalie reiterated.

Davari stressed it was his teamˈs ˈdamn dutyˈ to do all it could to please millions of Iranian football fans.