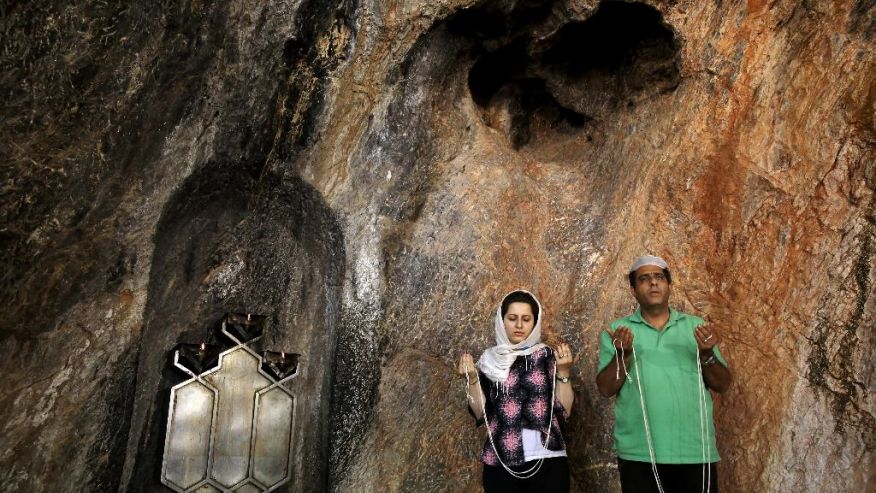 CHAK CHAK, Iran (AP) — Adherents of the Zoroastrian religion from around the world gathered at a mountain shrine in central Iran this week to celebrate their Persian roots, praying in remembrance of a princess who fled the seventh century Arab invasion.

At Chak Chak, some 600 kilometers (370 miles) southeast of the capital Tehran, believers gathered to remember Nikbanou, a heroine of the faith who according to tradition took shelter in the mountain and prayed for help. Miraculously, the mountain was said to have opened up and given protection to the princess, the youngest daughter of the last king of the Persian Sassanian empire.

A spring slowly drips from the ceiling of the shrine, built into a cliff-side cave, giving the site its name, which means “drip drip” in Persian.

Tradition says the spring is the mountain shedding tears in remembrance of Nikbanou. An immense tree stands nearby, which is said to have grown from Nikbanou’s cane.

“We’ve all gathered here to remember Nikbanou and celebrate our deep Persian roots,” said priest Ardeshir Khorshidian who was dressed in white to symbolize purity.

Many pilgrims stay overnight at pavilions set up at the base of the mountain. Families sitting on rugs had picnics while children played.

Dariush Tirandazi, an Iranian-American Zoroastrian, brought his 22-year-old daughter Nadia so she could experience the faith in the land where it was born.

“She wanted to learn and this was our chance to come here and show her the temple, to give her the chance to be with Zoroastrians and understand Zoroastrian culture and values.”

Zoroastrianism is a monotheistic religion predating Christianity and Islam founded some 3,800 years ago by Zoroaster. It was the dominant religion in Persia before the Arab conquest.

It stresses good deeds, and fire plays a central role in worship as a symbol of truth and the spirit of God.

Thousands of Zoroastrians, like many other Iranians, immigrated abroad under former president Mahmoud Ahmadinejad because of social restrictions and a worsening economy. But now a dozen have returned to live in Iran this past year, the government said.

“The trend of (Zoroastrian) immigration abroad stopped after last year’s presidential elections. It has even reversed,” Yunesi said. “We are listening to their demands in order to find legal solutions to their problems.”

Esfandiar Ekhtiari, the only Zoroastrian lawmaker in Iran’s parliament, said his fellow believers have been denied top government jobs because of their religion.

“We are talking to the government to find a legal solution for some of our concerns. However, we do enjoy freedom to practice our own religion, customs and ceremonies,” he said.

Ekhtiari urged Zoroastrians living abroad to return to Iran and join the 25,000 fellow believers who live there today.

“Return to your motherland, and rest assured that we welcome you with open arms,” he said.