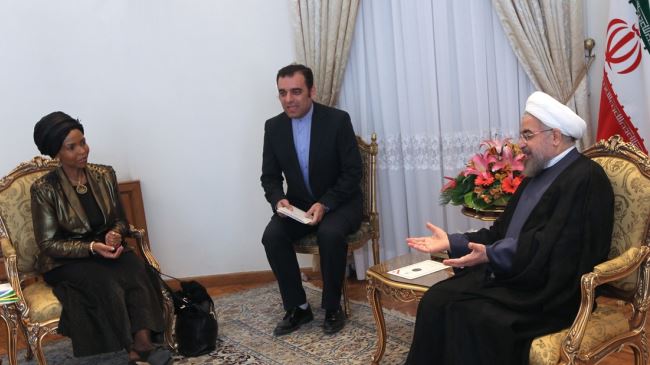 Iran’s President Hassan Rouhani says the Islamic Republic is ready to reach a final deal with the P5+1 countries on Tehran’s nuclear energy program based on international regulations.

“The continuation of unfair sanctions against Tehran is not possible and Western firms are negotiating and signing contracts for cooperation with Iran,” Rouhani said in a meeting with South African Minister of International Relations and Cooperation Maite Nkoana-Mashabane in Tehran on Sunday.

He added that the regime of “incorrect and unfair” sanctions adopted by Western countries against Iran has faced numerous problems.

He said Iran and South Africa enjoy great potential to improve relations and added that the two countries have a strong political will to strengthen cooperation in political, cultural and economic fields.

The Iranian president further stated that violence, extremism and terrorism are major problems of developing countries in the world and expressed Iran’s readiness to have close cooperation with South Africa on regional and international issues.

Rouhani added that terrorism and extremism are the outcomes of Western powers’ measures, saying, “Western countries will undoubtedly face many problems caused by these terrorist groups in the future.”

He condemned the heinous act of killing innocent people by terrorist and extremist groups across the world and called on developing countries to boost cooperation to counter such moves.

“I believe that countries, particularly developing states, must cooperate in order to fight terrorism, violence, poverty and extremism in cultural, economic, security and intelligence terms and even have operational cooperation if necessary,” the Iranian president pointed out.

The South African minister, for her part, criticized the unfair sanctions imposed on Tehran over its nuclear energy program, saying such bans have also affected the entire African region.

Mashabane threw her country’s weight behind nuclear negotiations between Iran and the P5+1 countries.

Iran and the five permanent members of the UN Security Council – the United States, China, Russia, France and Britain – plus Germany have been discussing ways to iron out their differences and start drafting a final deal that would end the West’s dispute with Iran over the country’s nuclear energy program.