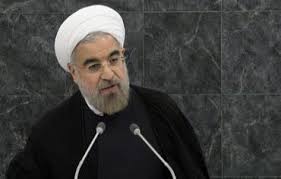 A not-so-funny thing happened to President Rouhani’s press conference on Saturday: the celebration of the anniversary of his election was overtaken by the crisis in Iraq and Iran’s involvement.

Amid mounting reports that Iran’s elite Qods Force, troops, Basij militia, and commanders are in Iraq, Rouhani insisted that “the issue of Iranian forces’ engagement has not been raised so far”:

Since the onset of its establishment, the Islamic Republic has never taken such measures and we have never sent our troops to another country for operations. Of course, we will provide countries with our consultative views.

Rouhani’s statement was a direct contradiction of the statement by Iraqi Foreign Minister Hoshyar Zebari that Iran has “offered to help in any way we want, even to send forces”.

Iranian forces are reportedly involved in the defense of Samarra and its Shia shrines, 70 miles north of Baghdad, and in Diyala Province in eastern Iraq. Qods Force commander Qassem Soleimani is said to have been in and near Baghdad, reviewing defense positions and talking to high-level Iraqi Government officials.

Any move that complicates the situation in Iraq will not be in the interest of Iraq and the region. Iraqi people and government from all political and religious groups will confront the pro-violence, extremist and terrorist elements as a unified front.

The Supreme Leader’s top foreign policy aide, Ali Akbar Velayati, echoed, “Problems in the Middle East region could be solved more easily if outsiders did not meddle in the domestic affairs of regional countries”.

And Interior Minister Abdolreza Rahmani Fazli said Iran’s support “against the flow of Takfiri and terrorist groups…does not mean dispatching forces, but condemning terrorist moves and closing the borders”.