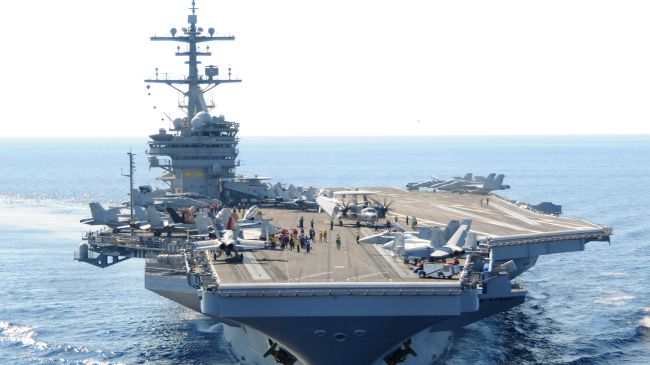 The Bush carrier along with a battle group of ships are “in the region and ready for tasking”, Pentagon said.

The Pentagon says the US aircraft carrier George H.W. Bush and more than 50 attack aircraft are in the Persian Gulf, ready to launch attacks against Takfiri militants in Iraq.

The warship along with a battle group of ships are “in the region and ready for tasking,” Pentagon spokesperson Rear Adm John Kirby said on Friday.

Iraqi armed forces have had fierce clashes with the militants over the past few days. The terrorists have threatened to do terrorist acts in other Iraqi cities too, including the capital Baghdad.

Takfiri groups, including the so-called Islamic State of Iraq and the Levant (ISIL), are reportedly coming to Iraq from neighboring Syria and Saudi Arabia to undermine security in the country.

Kirby also pointed to the presence of over 30,000 military personnel in the Middle East in order to defend against any possible aggression and terrorist acts.

“I also think it’s important to remember that we have some 35,000 US military personnel in the Middle East region,” Kirby said. “Our forces there work closely each and every day with our partners to defend against external aggression and terrorist networks that threaten America and its allies.”

He went on to say that US Secretary of Defense Chuck Hagel has talked with senior military officials over options President Barack Obama has to consider for the escalating crisis in Iraq.

“Over the last 36 hours, the (Hagel) has met a number of times with senior military leaders to discuss events on the ground and to prepare options for the president’s consideration,” Kirby said.

The options “cover a wide range of military capabilities and will be designed… to help break the momentum of ISIL’s progress and bolster Iraqi security forces,” he added.

In March, the Pentagon dispatched 100 Hellfire missiles to Iraq, in addition to 200 more which had been sent previously, as well as millions of rounds of small-arms fire, tank ammunition and helicopter-fired rockets.