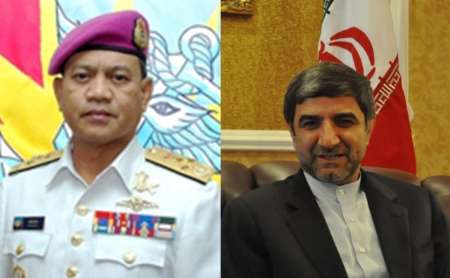 The meeting between Ambassador Mohammad-Jalal Firouznia and General Nasreddin Ben Othman took place at the Headquarters of the Malaysian Defense Ministry in the presence of a number of this country’s high ranking military officials.

The Malaysian Army, comprised of land, air, and naval forces, was established in the year 1963 and the Commander in Chief of the Malaysian Armed Forces is the Southeast Asian country’s king.

Iran and Malaysia have cooperated in a number of large industrial projects, many of them in the energy sector.

In December 2007, the two signed a US$6 billion deal to develop areas of Iranˈs offshore gas fields. In addition, Iran and Malaysia are working towards an extensive multilateral oil refinery deal with Syria and Venezuela.

Both countries are members of the Organization of Islamic Cooperation (OIC) and the Non-Aligned Movement (NAM) and have used these forums and bilateral relations to develop more cordial and closer political ties.