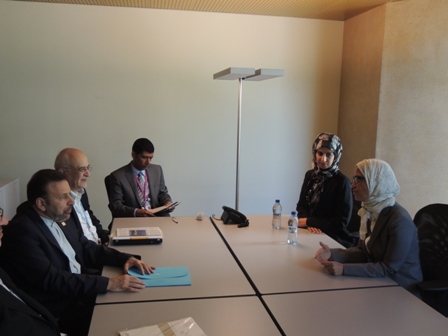 Mahmoud Va’ezi’s negotiations on the sidelines of the WSIS+10 with his counterparts were focused around the axis of expansion of technological cooperation at the service of regional peace and stability.

In his meeting with the Egyptian Telecom Minister Atef Helmi, Va’ezi stressed the great significance of ICT in various aspects of life and the development of the societies, as well as expansion of bilateral cooperation aimed at promotion of regional peace and stability.

On global significance of the Internet, he said that the phenomenon does not belong to any certain country as it belongs to the whole world nations, and therefore its management, too, should not be monopolized.

He meanwhile stressed the need for consultations between the two countries’ officials in various levels on regional and international developments.

The Egyptian ICT minister, too, referred to the old record of the two ancient countries’ relations and cooperation, arguing that dialogue between the two countries’ officials will accelerate the development trend of their relations.

Helmi welcomed his Iranian counterpart’s comments made at the WSIS+10 Summit, announcing Cairo’s readiness for being benefitted from the Iranian technicians’ experience in ICT field.

In his meeting with his Qatari counterpart, Va’ezi highlighted the new Iranian government’s policy of expanding foreign relations, stressing that the expansion of technical and economic relations, especially with neighboring and Muslim countries have highest priorities in this approach.

He referred to Iran’s achieved progress in ITC research and development fields and the will both in Tehran and Doha for further expansion of cooperation, announcing Iran’s readiness for expansion of ITC cooperation with Qatar.

The Iranian ITC minister meanwhile noted that keeping in mind that the Internet has today entered all levels of the nations’ lives and that the Internet technology is too broad-scale to be monopolized by a single country, or a group of countries, deducted that its laws, too, must secure the entire Internet users’ interests.

The Qatari ITC Minister Ms. Al Jaberi, too, referred to the extremely rapid development of the information technology in the world, highlighting the necessity of fast development of the ITC infrastructures in member countries of the WSIS in order to be benefitted from those rapid advancements.

She meanwhile asked for exchange of information on Internet fraud with Iran.

In a separate meeting with his Albanian counterpart Ms. Melina Harito, Va’ezi sought ways for the expansion of cooperation in ICT field.

He referred to the high investments in ICT field in Iran, especially in the field of broadband technology, proposing that the two countries can cooperate in that field.

The Iranian telecom minister also met and conferred with his Saudi counterpart Muhammad Jamil Mullah separately on the sidelines of the international ICT event.

Both sides were agreed on the need for expansion of relations between the two major regional Islamic countries and the opening of a new chapter in bilateral ties, especially in ICT field in their meeting.

Expansion of technical and international cooperation was another axis of the Iranian and the Saudi telecom ministers’ talks.

The 2014 WSIS+10 High-Level Event endorsed the WSIS+10 Statement on Implementation of WSIS Outcomes and the WSIS+10 Vision for WSIS Beyond 2015.

The Outcome Documents have been developed in an open and inclusive preparatory process, the WSIS+10 Multi-stakeholder Preparatory Platform (WSIS+10 MPP).