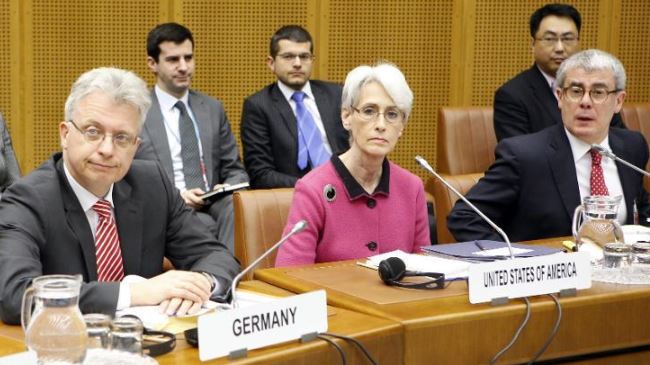 German, US and French envoys (from L to R) during nuclear talks with Iran in Vienna, Austria, on February 18, 2014

A high-profile German delegation has arrived in Iran to hold talks with senior Iranian officials aimed at bridging the gap between Tehran and Berlin in the negotiations over Tehran’s nuclear energy program.

The delegation, led by German representative at the nuclear talks Hans Dieter Lucas, arrived in the Iranian capital Tehran on Friday, and is scheduled to meet with Ali Akbar Velayati, a top advisor to Leader of the Islamic Revolution Ayatollah Seyyed Ali Khamenei, later in the day.

The German delegates are also slated to hold talks with Seyyed Abbas Araqchi, who is a top Iranian nuclear negotiator as well as Iran’s deputy foreign minister for legal and international affairs, on Sunday.

The meetings come as top Iranian diplomats have already held separate bilateral talks with representatives from the United States, France and Russia.

The bilateral talks come ahead of the next round of negotiations over Tehran’s nuclear energy program scheduled for June 16-20 in the Austrian capital city of Vienna.

Iran and the five permanent members of the UN Security Council – the United States, China, Russia, France and Britain – plus Germany have been discussing ways to iron out their differences and start drafting a final deal that would end the West’s dispute with Iran over the country’s nuclear energy program.

Iran and its negotiating partners wrapped up their latest round of high-level nuclear talks in Vienna on May 16.

The Iran Project is not responsible for the content of q