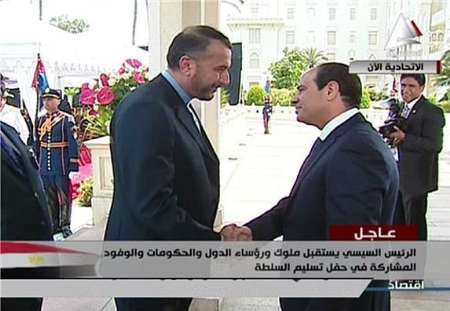 ehran, June 13, IRNA – Head of Egyptˈs Committee for Writing Constitution Amr Mousa said that the presence of Iranian envoy in the inauguration ceremony of Egyptian-elect president Abdel Fatah Al-Sisi has an important message for Muslim world.

Mousa made the remarks after a two-hour meeting with Iranian Deputy Foreign Minister for Arab and African Affairs Hossein Amir Abdollahian in Cairo on Thursday.

He said that Egypt will pave the path of national reconciliation and economy will top the agenda of the third Egyptian president.

Mousa said that consultation between Iran, Egypt and Saud Arabia for resolving the Syrian crisis will continue.

Amir Abdollahian, for his part, said the Islamic Republic of Iran respects the vote of the Egyptian people.