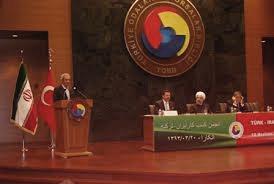 Rouhani visit brings a boom of Iranian companies to Turkey

TEHRAN, June 11 (MNA) – After the president Rouhani’s visit to Turkey, over 800 companies and business firms filed for registration in the country.

Iran and Turkey’s heads of Chambers of Commerce emphasized upon improving the current level of economic cooperation through exploiting every opportunity between the two countries.

The meeting was held after eighteen years between Iran and Turkey and both sides emphasized on more cooperation in the private sectors.

Gholamhossein Shafei said that relations between Iran and Turkey should be on higher level and dubbed Turkey as Iran’s historical friend and said that the 11th cabinet sought better relations with neighbors, Muslim countries especially Turkey. “The private sector is important for us, and barriers should be eliminated in the business between the two countries,” he added.

He pointed to the potentials of both countries such as Iran geographical position which make it the best option for transiting Turkish goods to Far East market and Turkey’s geographical condition as the best route for Iran’s goods to the Europe.

Head of Turkey’s Chamber of Commerce Rifat Hisarcıklıoğlu also pointed to the geographical position of both countries and political conditions of the region, adding that Iran and Turkey cooperation could provide better access to the world markets.

Hisarcıklıoğlu said that more than 800 new Iranian companies of private sectors registered in Turkey and added that businessmen of both countries with their unity should show ‘cooperation and development’ to the whole world.