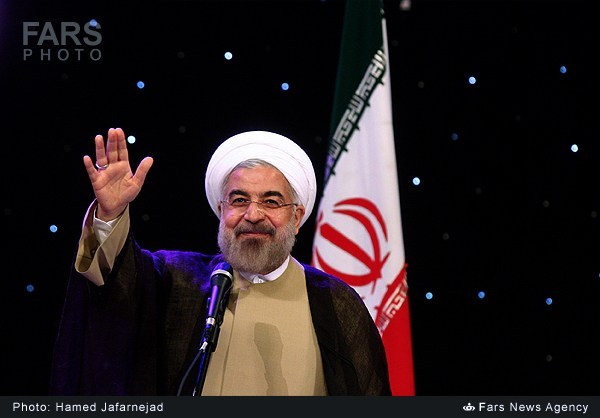 Tehran, June 12, IRNA – President Hassan Rouhani said on Thursday that the Iranian nation is moving on the road to moderation and all hope that the era of extremism around the globe comes to an end for ever.

The President made the remarks in a gathering held on the eve of the auspicious birth anniversary of the Imam Mahdi (may God hasten his reappearance), the 12th Imam of the Household of Propeht Mohammad (Peace Be Upon Him).

The vigilant Iranian people through their massive participation in the last yearˈs presidential election proved that they are united and like a democratic system, he said.

In last yearˈs presidential election, the nation said a ˈBig Noˈ to superstitious people, he said, adding ˈThe election raised hope in the hearts of world people as asserted by different world officials during their meetings wth me.ˈ

The government is accountable to all people from different walks of life and welcomes all criticisms, said President Rouhani.

ˈIf a group of individuals treat us impolitely, our response to them will be polite and respectful,ˈ he underlined.

ˈWe have gathered to demonstrate peace, reconciliation and brotherhood as days of discords and differences are numbered,ˈ said President Rouhani.

ˈWe will attain our goals through moderation and this path will be irreversible,ˈ he said.

Moderation does not mean adopting such policies that may increase the number of enemies rather it means treating others with respect and politeness, said President Rouhani.

ˈModeration means making use of rationality and safeguarding the countryˈs national interests. It also urges us to maintain our technological know-how and take necessary measures to have economic sanctions imposed on the country lifted. It also implies that we have to help restore peace to the region and world,ˈ the president said.

The Iranian people are the real owner of this country and all signs of discrimination and poverty should be removed, he underlined.

Few individuals using public facilities have been trying to disappoint people but to no avail, Rouhani said.

No faction or group is entitled to confiscate the Sacred Defense era, the Leadership or the Islamic Republic system in its own favor, underlined President Rouhani.

Since the new government came to power, it has been doing its best to fulfill its promises and will never ignore the promises under any circumstances, he said.

Minority should be respected as much as the majority is but the former is not allowed to disrespect the decisions made by the majority, he said.

The new government has taken significant measures to attain its desired goals in foreign policy, cultural issues and economy domains, he said.

The government tries to reflect the real image of the Iranian people and its Islamic system to world nations, he said.

ˈAll believe that the Iranian people and their civilization are full of dignity and glory but we should bear in mind that if we want others to respect us, then we have to respect them,ˈ he said.

ˈAbiding by the principles of the revolution does not mean that we should use improper tone,ˈ underlined the president.

ˈIn administering the country, we observe cultural considerations in our foreign diplomacy and domestic affairs,ˈ he said.

The last yearˈs presidential election had one clear message and it was the message of unity, brotherhood and reconciliation, he said adding ˈWe should realize that the region is now facing various issues.ˈ

ˈWhat is the root causes of so many problems and carnage of people in the region? Why is there no calm in Syria? Why have their homes been devastated? Why should all witness a river of human blood flowing in the war ravaged country? Why should all witness people being massacred in Iraq by a group of extremists?,ˈ the president questioned.

The president also asked why a group of extremists disguised as Muslims are now sowing seeds of discord among world Muslims.

Some tries to revive the past but this is impossible, underlined President Rouhani.

ˈWe are very sorry to witness spread of violence, carnage, terror and homelessness of people. We never tolerate such situation….we are determined to fight violence, extremism and terrorism both in the region and the world,ˈ Rouhani underlined.

ˈThese moves have a clear message for us and that is the enemies of Islam are now busy masterminding various plots to sow seeds of discords among Muslims and so all should exercise vigilance to deal with the issue,ˈ he said.