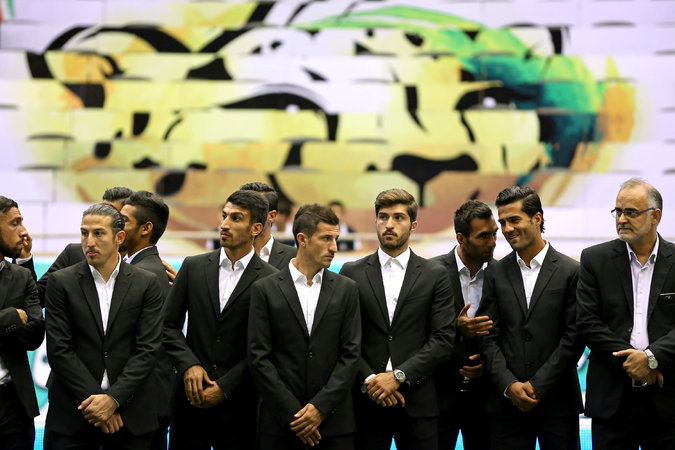 Iran’s Team Melli at a poorly attended farewell ceremony in Tehran this month, ahead of the 2014 World Cup in Brazil. Credit Ebrahim Noroozi/Associated Press

TEHRAN — In a city where few people are allowed to organize large gatherings, and fun is enjoyed in private, the public celebrations of a year ago are legendary.

The Iranian national soccer team, called Team Melli here, had just qualified for the World Cup for the first time since 2006 by beating South Korea in a tense match. Millions of Iranians flooded the streets of the capital in a display of pure happiness, dancing and singing of national pride. The authorities were helpless to stop them.

Now, days before Iran’s opening World Cup match with Nigeria on Monday, fun-loving Iranians should be thrilled for a new opportunity to celebrate. But Tehran is possibly the only capital in the world where there are no signs of the coming tournament.

Restaurants are not decorated in national colors, there are no billboards portraying soccer stars, and nobody has tied the Iranian flag to the antennas of cars. On social media, which Iranians can only access using illegal software, Team Melli’s coming games are hardly discussed.

“It’s just that nobody is excited,” said Arman Hosseinabadi, a 30-year-old accountant. “It is as if we are paralyzed.”

Soccer experts agree that the Iran team faces a complicated task in making it to the second round. The World Cup draw placed Iran, the top-ranked team from Asia, in a difficult group: with soccer power Argentina; Nigeria, the African champion; and Bosnia and Herzegovina, making its debut in the tournament.

“Almost all their players play in the weak national league, instead of in big international teams,” said Samy Adghirni, a correspondent for the Brazilian paper Folha de S.Paulo, who has been following the Iranian team for months. “Their coach publicly complains about the quality of his players. I have never seen anything like it.”

Some Iranian media have questioned the lack of enthusiasm for the Team Melli. “Why doesn’t anybody believe in our national team?” the reformist website Asr-e Iran wrote in an editorial. “If we believe with all our might we may turn into the surprise of the tournament: We will be the untamable cheetahs of 2014,” the site wrote hopefully, referring to the national team’s new logo, which features the Iranian cheetah.

As with much in Iran involving money and influence, the national team is overrun with officials claiming to act in its best interest, but focusing on everything except improving the team.

Its Portuguese coach, Carlos Quieroz, had several public disputes with the Football Federation of the Islamic Republic of Iran, complaining that the team was not getting enough money to prepare for the World Cup. In turn, the federation accused the coach of arranging lucrative warm-up matches and pocketing the money. Mr. Quieroz denied the allegations.

Like the other qualifying teams, Iran received $1.5 million from FIFA, soccer’s international governing body, but this was apparently insufficient to order enough team uniforms. Last month, the president of the Iranian federation said that players were not allowed to exchange their shirts with opponents after the games, a tradition in soccer.

“This is the year of economic resistance,” Ali Kaffashian told the website Khabar Online, hinting at Iran’s answer to international sanctions over its nuclear program. “We must learn to do with as much as we can.”

Citing bad weather, President Hassan Rouhani shunned a farewell ceremony here for the team last week. The event had to be moved from its original venue to a smaller one when only 3,000 fans showed up, far less than the expected 12,000.

It is more than the daunting competition and the controversies surrounding Team Melli that keep the Iranians from warming to the World Cup. The authorities have been working hard to nix any soccer related excitement.

Tehran’s cinemas have been told by the police that they are not allowed to show World Cup matches to a mixed audience of men and women, “out of respect for Islamic morals.” A plan to show Iran’s games on some of the large electronic billboards across the city was canceled, and on Wednesday, restaurant and coffee shop owners said they had been told by the Ministry of Islamic Guidance and Culture to refrain from decorating their establishments with the national flag or the colors of other countries.

“We want to decorate our restaurant with German flags,” said one restaurant owner who asked to be identified only by his first name, Farhad. “But even that is not allowed. Fun, people gathering in large groups, such things make the authorities nervous.”

Until Monday, the day of the team’s first game, nobody is expecting much enthusiasm. “We bought a large television set for our customers to watch the matches,” said Hadis Bagheri, who runs a modest coffee shop. “But people are just not interested. Instead of talking about the World Cup they are hiding their faces behind mobile devices.”

Still, if Iran managed to beat Nigeria, everything might change.

“People are busy trying to survive,” said Behzad Talebi, a movie production manager. “But if we win, unexpectedly, be sure we will witness a return of last year’s street party. In the end, we all love to win.”

This article was written by Thomas Erdbrink for the opinion page of the New York Times on June 12, 2014.