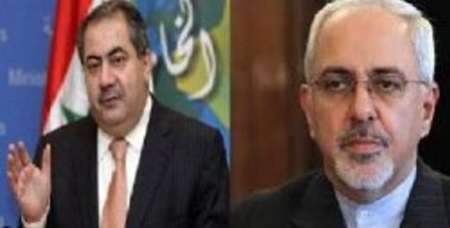 Mohammad Javad Zarif who was speaking with Hoshyar Zebari following the terrorist groups’ invasion against Iraqi city of Mosul, condemning those attacks which has led to getting killed and wounded of a number of Iraqi citizens and homelessness about half a million, announced Iran’s support for the Iraqi government and people in their campaign against terrorism.

The Iraqi top diplomat who is in Athens, Greece, to take part in the Joint Arab League (AL) and European Union (EU) ministerial meeting presented a report to Zarif on the latest security status of Iraq and appreciated the Iranian foreign minister for his phone call.

He also appreciated Iran for its political and spiritual support of Iran for the Iraqi government and nation.

“The Iraqi nation and government are determined to resist against all types of terrorism,” he further stressed.

The two neighboring countries’ foreign ministers were agreed in their phone talk that the ISIL and the Takfiri groups are the enemies of the entire Iraqi people.

They also stressed the need for strengthening the spirit of national unity in order to effectively encounter the perils of terrorism in their country.

A day after taking over Mosul, Iraqˈs second-largest city, militants gained nearly complete control of the northern city of Tikrit, witnesses in the city and police officials in neighboring Samarra told CNN.

Heavy fighting erupted inside Tikrit — the hometown of former Iraqi dictator Saddam Hussein — as the military tried to regain control of the city, the sources and a police official in Baghdad said.

According to the witnesses in Tikrit and the Samarra police officials, two police stations in Tikrit had been set on fire and a military base taken over by militants, who are believed to be from the Islamic State of Iraq and Syria, an al Qaeda splinter group also known as ISIS and ISIL.

The governor of Salaheddin province, of which Tikrit is the capital, was missing, according to the Tikrit and Samarra sources.

And in Sefwan, a city on the Kuwait border about 500 kilometers south of Baghdad, a car bomb exploded near an outdoor market, killing at least three people and injuring 12 others, police in Basra said.

Those fleeing the fighting, in vehicles or on foot, some bringing only what they can carry in plastic bags, are heading to the cityˈs east or seeking sanctuary elsewhere in Nineveh province or in Iraqˈs Kurdish region.

The rush led to bottlenecks at checkpoints Tuesday as people tried to reach safety in nearby Erbil.

Iraqˈs parliamentary speaker was scathing, saying the Iraqi forces ˈabandoned their weapons and the commanders fled, leaving behind weapons, armored vehicles. Their positions were easy prey for terrorists.ˈ

Prime Minister Nuri al-Maliki ordered that all military leaders who fled be court-martialed.

Later, Iraqˈs Defense Ministry said the air force had struck a group of ISIS militants along a highway leading south toward Samara, killing all of them. The ministry also said it would push back the militants.

ˈThis is not the end, we are very confident that we will be able to correct the path and to overcome mistakes,ˈ the ministry said in a statement posted to its website.

Forces from the Kurdistan regional government took up positions in southwest Kirkuk after militants took over several villages and districts north and west of the city and the Iraqi army withdrew, police officials there told CNN.