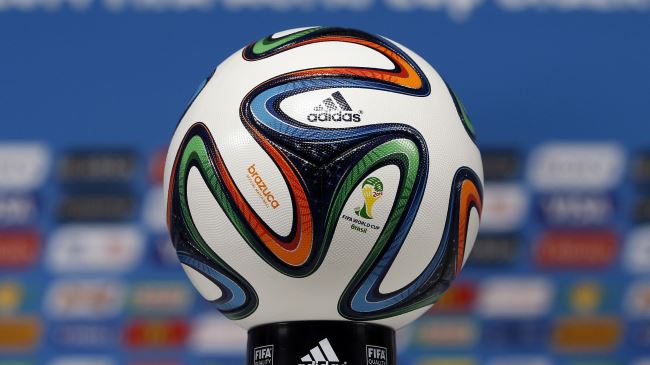 A football is seen on a small plinth ahead of a press conference in Sao Paulo on June 11, 2014 on the eve of the opening match of the 2014 FIFA World Cup in Brazil.

Estimated to be ultimately biting USD 11 billion into Brazil’s financial resources and having undergone seven years in the making, 2014 World Cup is to get finally off the ground with the country’s facing off against Croatia in the opener.

The opening match is to kick off in Sao Paulo at 5:00 pm (1500 GMT) on Thursday, marking the start of the 32-team extravaganza.

Coach Luiz Felipe Scolari has depicted the path facing, Selecao, as the team is known by its diehard aficionados, towards being crowned the tournament’s champions as seemingly a cakewalk.

Around 6,300 military firefighters will protect the country’s administrative capital, Brasilia, for the following month, 1,800 of them specifically for the World Cup. A record 30 people died in soccer-related violence last year in Brazil, the highest in the world.

The number of the members of the tournament’s worldwide television audience is estimated to stand at several hundred million.

Brazil hosted Confederations Cup as a microcosm last year, when rage within the populace over poor public services in the country came to a head, resulting in deadly clashes.

President Dilma Rousseff has warned that her government will not tolerate a repeat of last year’s protests. “We will guarantee the security of Brazilians and of those who come visit us,” she said.

Selecao has Spaniards to reckon with, the latter endeavoring to make history by becoming the first side from Europe to win a World Cup in South America.

Raffle has grouped the national Iranian football team with Argentina, Nigeria, and Bosnia and Herzegovina in the tournament’s Group F.

Team Melli are to face Nigeria at the Arena da Baixada stadium in the southern Brazilian city of Curitiba on June 16.