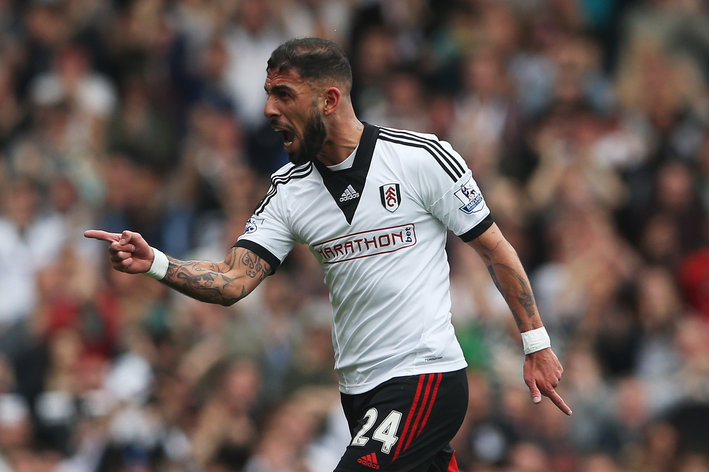 Ashkan Dejagah is a Fulham player, a German Citizen, but represents Iran in International Football. Iran is drawn into Group F at the World Cup. What can we expect from him and the club? Will a great performance cause him and his glorious hairline to leave the Cottage?

When a team is relegated, you wouldn’t expect them to be full of quality. In Fulham’s case, that is true. However, even a club like Fulham have a couple players peppering various World Cup squads. Though it remains to be seen how long they’ll remain at the Cottage.

The first such player is one of my favorites Ashkan Dejagah. He was my pick for Fulham player of the year, and was one of the few bright spots in a pretty horrible season. And it’s not just because I smile uncontrollably every time I see his hair.

Service for Iran: Dejagah is an interesting case. Though he was born in Tehran, he moved to Germany at age one and has been a citizen of that country since he was sixteen. He represented Germany at every level up to the U-21s and scored for them at the U-21 Euros in 2009. His career for Germany was not without controversy however. In 2007, he elected to decline a call up for Germany for a match in Israel. Dejagah has stated that because he has family still living in Iran, and that his parents still travel there; he was frightened of the retribution they might face from the Iranian government. Even though it was said that this wouldn’t effect his chances of playing for Germany going forward, he never represented Germany at a higher level.

He did not however, switch his allegiance to Iran rejecting several chances to play in 2011. It wasn’t until Carlos Queiroz took over the managerial duties for Iran that Dejagah finally accepted a call up, scoring twice against Qatar in his debut.

What makes him interesting: Iran’s team is fairly unknown. They don’t play that often, and most of their players don’t play on clubs outside the Middle East. Those that do mainly toil in lower divisions or in small European leagues. Dejagah is the exception to this. He has played at a high level in Germany, winning a Bundesliga title with Wolfsburg. He’s also shown that he’s a very good player in the Premier League.

In league play he isn’t the biggest goal scoring threat, only scoring every seven or eight games. He’s comfortable on either wing, though best deployed on the right. He tends to use his pace to get behind the defense and is at his best on counter attacks. On an a team like Iran that will probably need to sit back and defend, his counter attacking skills will be most important. He’s also very adept at combining with an attacking full back and will put in very good low service into the box.

What to expect in Brazil: Iran has a tough task ahead of them. Bosnia and Herzegovina and Argentina are expected to advance from that group, with Nigeria lurking as a dark horse. Iran is easily the fourth best team. With a good showing however, Dejagah could prove himself valuable enough for a team to make an offer on. I’d be sad to see him leave Fulham, but I believe he has a lot offer for other clubs.