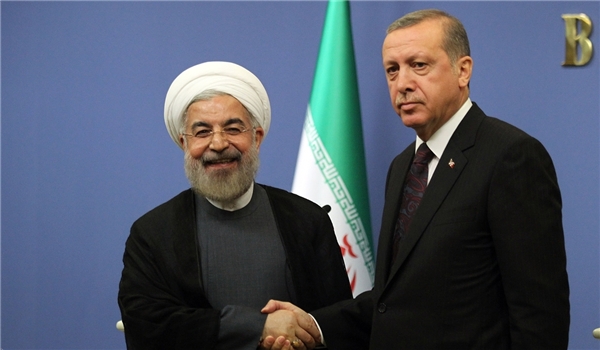 TEHRAN (FNA)- Iran and Turkey issued a joint statement at the end of the meeting of their First Strategic Relations High Council in Ankara.

The joint Tehran-Ankara meeting, held in the Turkish capital, was presided by Iranian President Hassan Rouhani and Turkish Prime Minister Recep Tayyip Erdogan. At the meeting, the two sides outlined their future cooperation in a final statement.

In the statement, the two sides laid emphasis on their determination to strengthen their bilateral relations based on international law and good neighborly relations and on issues of mutual interest.

Iran and Turkey also reiterated improvement of economic and commercial relations, saying it will result in the prosperity of the two nations and help regional stability.

The two sides also agreed to study ways to strengthen the two countries’ relations in the banking sector.

Tehran and Ankara also agreed to deepen their cooperation in the energy sector.

The Iranian president and Turkish prime minister also voiced their support for a Middle East free from nuclear weapons and other weapons of mass destruction (WMDs).

Tehran and Ankara also underlined their support for the legitimate rights of the Palestinians as well as the formation of the national unity government in the Palestinian territories.

The two sides also reiterated their support for the activities of the Economic Cooperation Organization (ECO) and laid emphasis on deepening cooperation among the member-states through ECO Trade Agreement.

Upon his arrival in Ankara, President Rouhani was welcomed in an official ceremony by his Turkish counterpart.

The Iranian president started his official visit to Turkey on Monday to discuss the latest developments on the international and regional scenes and explore new avenues for reinvigoration of all-out ties.