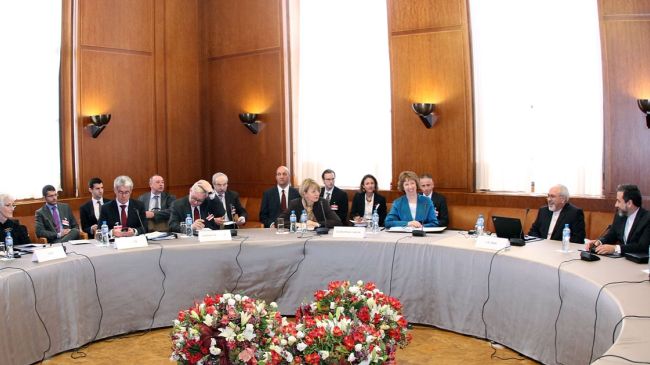 Representatives of Iran and six world powers attend a session of talks over Tehran’s nuclear energy program in Geneva on October 15, 2013.

A Japanese deputy foreign minister has reaffirmed Tokyo’s support for the ongoing nuclear negotiations between Iran and six world powers, praising Tehran for its constructive stance in the talks.

In a Monday meeting with Iranian Deputy Foreign Minister Morteza Sarmadi in Tehran, Nobuo Kishi expressed hope that Iran and the five permanent members of the UN Security Council– Russia, China, France, Britain, the United States – plus Germany would manage to settle their differences and ink a final deal on Tehran’s nuclear energy program.

The Japanese official also voiced satisfaction with the progress in the nuclear negotiations, saying Tokyo welcomes Iran’s constructive role in advancing the discussions.

For his part, the Iranian deputy foreign minister said the Islamic Republic had shown goodwill in honoring its commitments in the course of nuclear talks, adding that Japan can play a significant role in supporting the progress of the negotiations.

Iran and the six countries have been discussing ways to end their differences and start drafting a final agreement aimed at ending the West’s dispute with Iran over the country’s nuclear energy program.

In March, the Iranian foreign minister paid a two-day visit to Tokyo, where he held talks with senior Japanese officials, including Kishida and Japanese Prime Minister Shinzo Abe, over the expansion of bilateral relations.