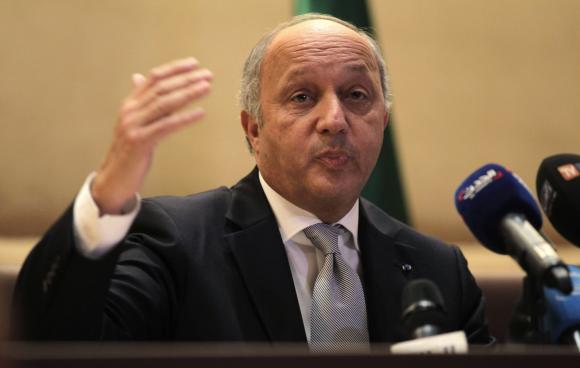 (Reuters) – France told Iran it must cut back a key part of its nuclear program and Tehran cast doubt on the chances of meeting a July deadline for a deal with world powers, highlighting the major hurdles negotiators still face.

Iran’s talks with six major powers on curbing its nuclear program in exchange for an end to sanctions could be extended for another six months if no deal is reached by a July 20 deadline, a senior Iranian official said.

While an extension is possible, experts believe both sides may come under pressure from critics at home to seek better terms during this extra time period, further complicating negotiations.

Singling out a big gap in negotiating positions that will be difficult to overcome in less than two months’ time, France’s foreign minister said Iran should drop a demand to have thousands of uranium enrichment centrifuges. Instead it should restrict itself to a few hundred of the machines used to increase the concentration of the fissile isotope.

Iran – which says its nuclear program is peaceful and rejects accusations it has been seeking to develop a nuclear weapons capability – now has around 19,000 centrifuges installed, of which roughly 10,000 are operating, according to the U.N. nuclear agency. Enriched uranium can have both civilian and military uses, depending on the degree of refinement.

“We are still hitting a wall on one absolutely fundamental point which is the number of centrifuges which allow enrichment,” Laurent Fabius told France Inter radio on Tuesday.

“We say that there can be a few hundred centrifuges, but the Iranians want thousands so we’re not in the same framework.”

Paris has long held out for strict terms in the negotiations and it was not immediately clear whether Fabius was spelling out Paris’ position or that of the six powers, also including the United States, Germany, Britain, China and Russia.

Western officials say Iran wants to maintain a uranium enrichment capability far beyond what it currently needs for civilian purposes. Iran says it wants to avoid reliance on foreign suppliers of fuel for planned nuclear reactors.

U.S. and Iranian officials held talks in Geneva on Monday to tackle ways of breaking a deadlock which has raised the likelihood that the deadline will lapse without a deal meant to head off the risk of a Middle East war over the nuclear issue.

The negotiations ran into difficulty last month with each side accusing the other of making unrealistic demands, raising doubts about prospects for a breakthrough next month.

IRAN SAYS TALKS MAY BE EXTENDED

An extension should be possible, but President Barack Obama would need to secure the consent of Congress at a time of fraught relations between his administration and lawmakers.

Iran and the powers included the July 20 deadline to reach a comprehensive agreement in an interim deal agreed on Nov. 24.

Iranian Deputy Foreign Minister Abbas Araqchi spoke of a possible extension to the talks in remarks in Geneva to Iranian media on the sidelines of meetings with senior U.S. officials.

“We hope to reach a final agreement (by July 20) but, if this doesn’t happen, then we have no choice but to extend the Geneva deal for six more months while we continue negotiations,” Araqchi was quoted as saying by Iran’s state news agency IRNA.”

Nuclear expert Mark Fitzpatrick of the International Institute for Strategic Studies think-tank said he did not think an extension was being formally discussed already as that would be to admit failure to meet the self-imposed target date. “But some discussion of it must be underway informally because a rollover is not as simple as it might seem,” he said. “To make it politically palatable, each side would want some marginal improvements, which will need to be negotiated.”

Iran expert Ali Vaez said both sides “might require additional interim concessions to placate their domestic skeptics” if the interim deal is rolled over because the parties are far apart. But if they have been able “to narrow the gap and need a few more weeks to hammer out the technical details, they might just opt for a no-cost extension,” Vaez, of the International Crisis Group think-tank, said.

“We are at a critical juncture in the talks,” U.S. State Department deputy spokeswoman Marie Harf told reporters in Washington, as part of consultations before the next round of Vienna negotiations scheduled for June 16-20.

A French diplomatic ‎source said officials from France and Iran would meet on Wednesday to discuss the Vienna negotiations. And Russian officials will have talks with the Iranians in Rome on Wednesday and Thursday, according to Iranian media.

“There are still gaps … in order to bring our views closer, the other side must make tough decisions,” Araqchi said.

A second senior Iranian official, Takht Ravanchi, was quoted as saying that putting an end to sanctions was one of the issues discussed during the bilateral session with the Americans.

“This government is determined to end unfair sanctions imposed on Iran,” Iranian President Hassan Rouhani said during a visit to Ankara this week. “Iran will do its utmost to reach a final deal in the near future.”