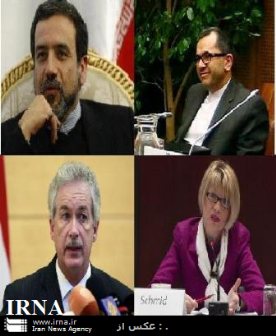 The Iranian delegation is headed by deputy foreign ministers Abbas Araqchi and Majid Takht-Ravanchi while US Deputy Secretary of State William Burns leads the US delegation.

Wendy Sherman, US Undersecretary of State for Political Affairs and Washingtonˈs top nuclear negotiator in the P5+1 along with two other prominent US figures are accompanying Burns during the talks.

Speaking to reporters upon his arrival in Geneva, Araqchi said there are different issues yet to be solved between Iran and the P5+1.

He said a lot of efforts are needed to bring views closer and that the other side has to make hard decisions and recognize legitimate rights of the Iranian nation.

The talks are being held on the eve of the fifth round of nuclear negotiations between Iran and the six world nations – known as the P5+1 – slated for June 16-20 in Vienna.

After talks in Geneva, the Iranian delegation will depart for Rome where it is scheduled to hold bilateral talks with a delegation from Russia on Wednesday and Thursday.

Araqchi also said that Iran will probably hold separate bilateral talks with delegations from France and Germany before Vienna talks.

Negotiations between Iran and the P5+1 in Vienna are aimed at agreeing to start drafting a comprehensive deal that they failed to do in the previous round of talks.