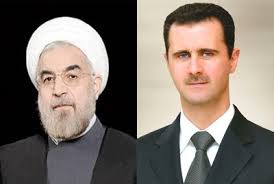 President Rouhani has sent a letter of congratulations to Syrian President Bashar al-Assad for his nominal re-election last week.

Rouhani’s message supports both the Iranian call for a political resolution — leaving Assad in power — and the Syrian regime’s presentation of legitimacy through the ballot.

Rouhani wrote Assad, “The results of this election show Syrian people’s trust and determination for moving toward stability, security and national solidarity.”

The Iranian President will continue his effort to wean foreign powers away from the Syrian opposition during his trip to Turkey today.

Ankara has been one of the main supporters of the opposition and the insurgency since the start of the uprising in March 2011, and Turkish-Iranian ties — economically vital to Iran — have been strained.

Accompanying the Syrian regime’s presentation that it is the only legitimate authority, Iran may try to revive the short-lived “contract group” with Egypt, Turkey, and Saudi Arabia in September 2012.

The Rouhani Government is pursuing “engagement” with Riyadh and has set aside its criticism of the July 2013 coup in Egypt, endorsing the election of General Abdel Fattah El-Sisi as President.

The President’s message was complemented by a Sunday statement from 230 of Iran’s 290 MPs: “Syria’s successful presidential election displayed the political strength of the Syrian government and nation against the policies of the US and its regional allies.”

Iran-US nuclear talks — the first publicly-declared bilateral discussions between the two countries since 1979 — have been expanded to include the European Union.

The lead Iranian negotiator, Abbas Araqchi, said he and Under Secretary of State William Burns will be joined in Geneva on Monday and Tuesday by Helga Schmid, the deputy to EU foreign policy chief Catherine Ashton.

The discussions take place before the 5th round of talks on a comprehensive nuclear agreement between Iran and the 5+1 Powers (US, Britain, France, Germany, China, and Russia), starting in Vienna on June 16.

The two sides are seeking the settlement before expiry of an interim Joint Plan of Agreement on July 20. If that is not possible, the negotiators are likely to pursue an extension of the interim deal while discussions continue through the summer and autumn.