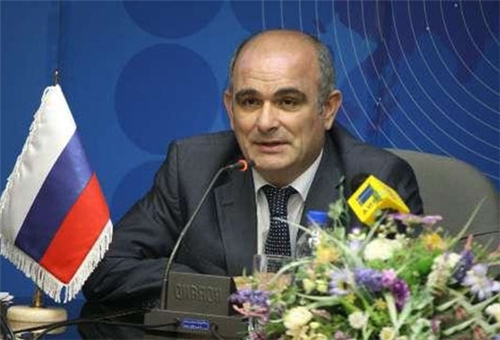 TEHRAN (FNA)- Russian Ambassador to Tehran Levan Jagarian announced his country’s willingness to import medicine from Iran in a bid to increase trade and economic cooperation between the two countries, and said no country, specially the US, can prevent the development of bilateral relations between Tehran and Moscow.

“Russia is deeply interested in importing medicine from Iran and this cooperation is among our important demands,” Jagarian told FNA on Monday.

He said that a delegation from the Russian health ministry, to be headed by deputy health minister, is due to visit Tehran today to discuss mutual cooperation between the two countries in producing drugs and Moscow’s medical imports from Iran.

Elsewhere, he blasted Washington for imposing unilateral sanctions against Iran, and said, “Russia is seeking solutions to increase its trade exchanges with Iran despite the US embargos, and this has discomforted Washington.”

Jagarian described Iran and Russia as two independent countries which can develop ties and cooperation with any foreign party that they want, and said wherever the interests of the two nations are involved, no country, even the US, can prevent mutual cooperation between them.

Iran-Russia trade currently totals $5bln a year, but economists say they can at least quadruple the volume of their trade exchanges.

Last week, Iran’s Ambassador to Moscow Mehdi Sanayee and Minister of Regional Development of the Russian Federation Igor Slyunyayev explored new avenues for the promotion of bilateral ties, particularly between the two countries’ regions and provinces.

During the meeting on Saturday, Slyunyayev referred to historical ties between Iran and Russia as the two Caspian Sea littoral states, saying that Iran is a close ally of Russia.

The Russian minister further noted that his country is keen to boost trade relations and joint investment with Iran.

He went on to say that the Ministry of Regional Development of the Russian Federation is ready to launch systematic economic cooperation among the provinces of the two countries and pave the way for Iranian private companies to promote interaction with the Russian ones.

Sanayee, for his part, said that Iran is ready to have a closer cooperation for arrangement of provincial seminars and exhibitions.