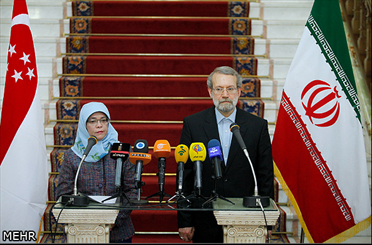 Larijani calls for expansion of relations with Singapore

Ali Larijani made the remarks at a joint press conference with Singaporean Parliament Speaker Halimah Yacob in Tehran on Sunday.

The Singaporean parliament speaker arrived in Iran on Saturday on a four-day visit, at the head of a parliamentary delegation.

She is scheduled to meet with members of the Iran-Singapore parliamentary friendship group and some other Iranian officials.

Larijani said that parliamentary and economic cooperation and important regional and international issues were discussed during his meeting with Yacob.

The Iranian parliament speaker expressed satisfaction over the Singaporean delegation’s trip to Iran, adding that the visit will definitely help the efforts to expand cooperation between the two countries.

Yacob thanked the Iranian Majlis speaker for his invitation.

She said that this is the first time that she has visited Iran as Singapore’s parliament speaker.

Iran and Singapore have had good relations for more than 40 years, and during this time, various delegations from the two countries have exchanged visits, she stated.

Yacob mentioned Larijani’s trip to Singapore in 2011 and said she would be happy to invite him to visit the country again.