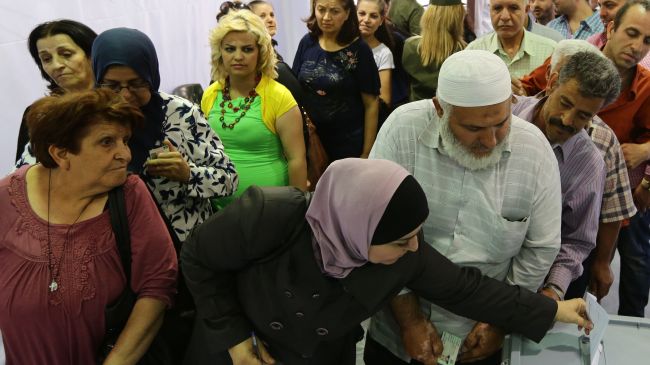 A Syrian woman casts her ballot in the country’s presidential election on June 3, 2014 as others queue up at a polling station in Damascus.

TEHRAN (FNA)- The Iranian parliament in a statement on Sunday voiced support for the recent presidential election in Syria which resulted in the victory of incumbent President Bashar al-Assad, and underlined that the polls foiled enemies’ plots against the Syrian people.

“The successful holding of Syria’s presidential election was a manifestation of the Syrian people and government’s political power against the policies of the US and its regional allies,” the statement said, and added, “By their overwhelming yes vote to Mr. Bashar Assad, the Syrian people thwarted all the plots hatched by the US and other enemies of the country and strengthened the front of those countries which support peace and oppose war in Syria.”

The Iranian parliamentarians described political solution as the only way to settle the crisis in Syria, and blamed the US and its allies for the killing of innocent Syrians during the country’s war against the terrorists who were supported by the foreign countries.

They also felicitated the Syrian people and President Bashar Assad on his decisive victory in the election, and asked the Iranian government to continue its support for the Syrian nation and make further efforts to establish peace in the region and fight terrorism as in the past.

President Assad won a landslide victory after gaining 88.7 percent of the votes cast in the election on Tuesday.The country’s Supreme Constitutional Court announced that 73.42% of the 15.8 million eligible voters had taken part in the election.

Shortly after the election results were announced, streets in the capital Damascus were filled with joyful crowds chanting “God bless Bashar,” while fireworks filled the skies.

“The will of the Syrian people has won in Syria,” chanted a follower of Al-Assad.

By choosing Assad, Syrians voted “for a leader who faces the war for the iconic leader Bashar al-Assad who has stayed at the side of his people in all corners of the homeland,” the ruling Baath party, to whom al-Assad belongs, said in a statement on Tuesday.

Syria has been gripped by deadly violence since March 2011. According to reports, the western powers and their regional allies – specially Qatar, Saudi Arabia and Turkey — are supporting the militants operating inside Syria.